all text and images
© Louise Santa Ana
September 25, 2014before and after, home improvements

It’s DONE! We have a shiny new bathroom!

It’s been completed, with new coat of paint, for weeks, but someone forgot to upload the photos and click publish. So here is your rather belated tour of the bathroom.

Here is the empty room to remind you where we started from. 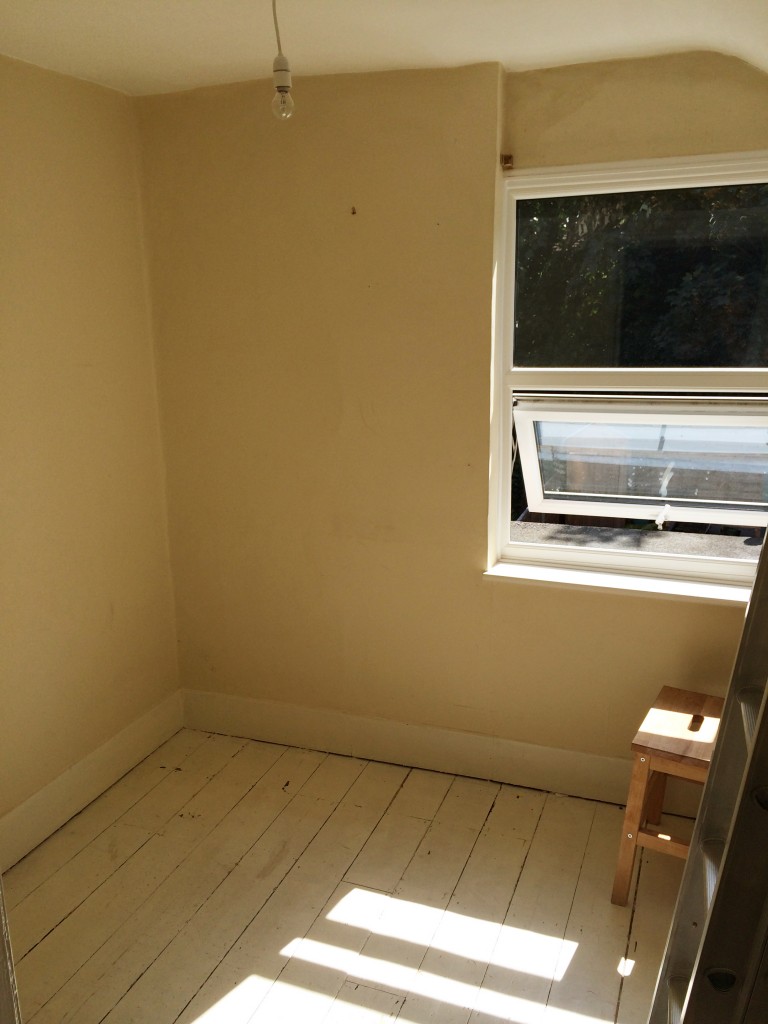 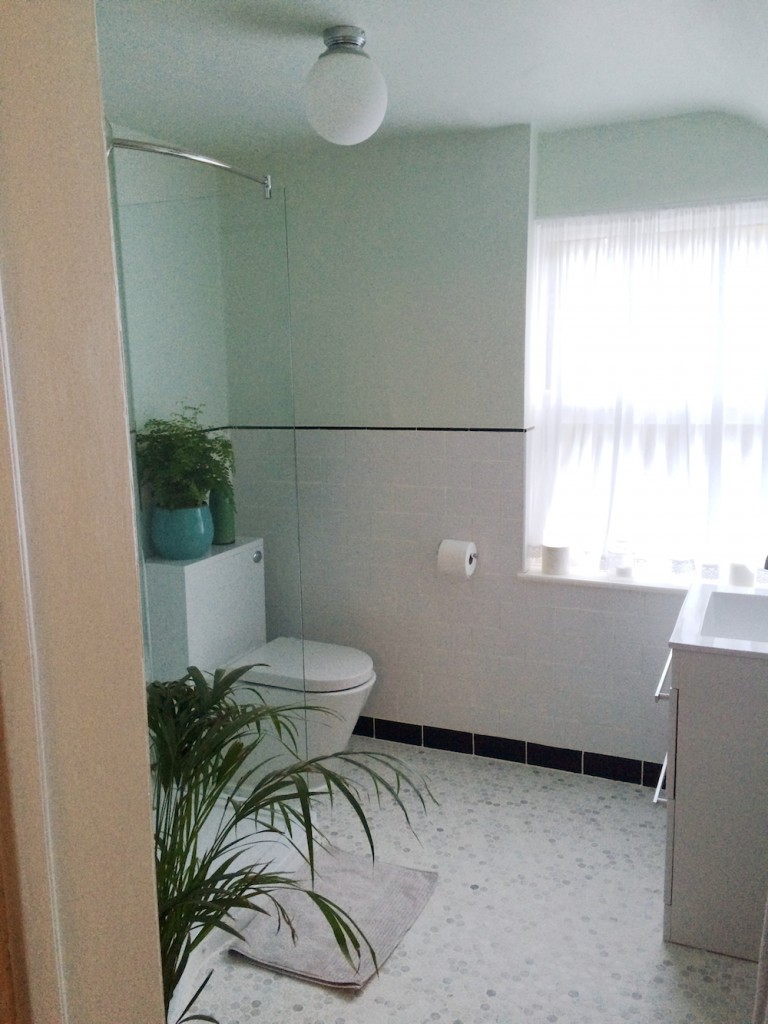 All done and ready to use.

I chose an overhead drench shower fitting. Because why not? It comes with a handy microphone to sing along while you’re in the shower. Said microphone doubles up as a movable shower head. 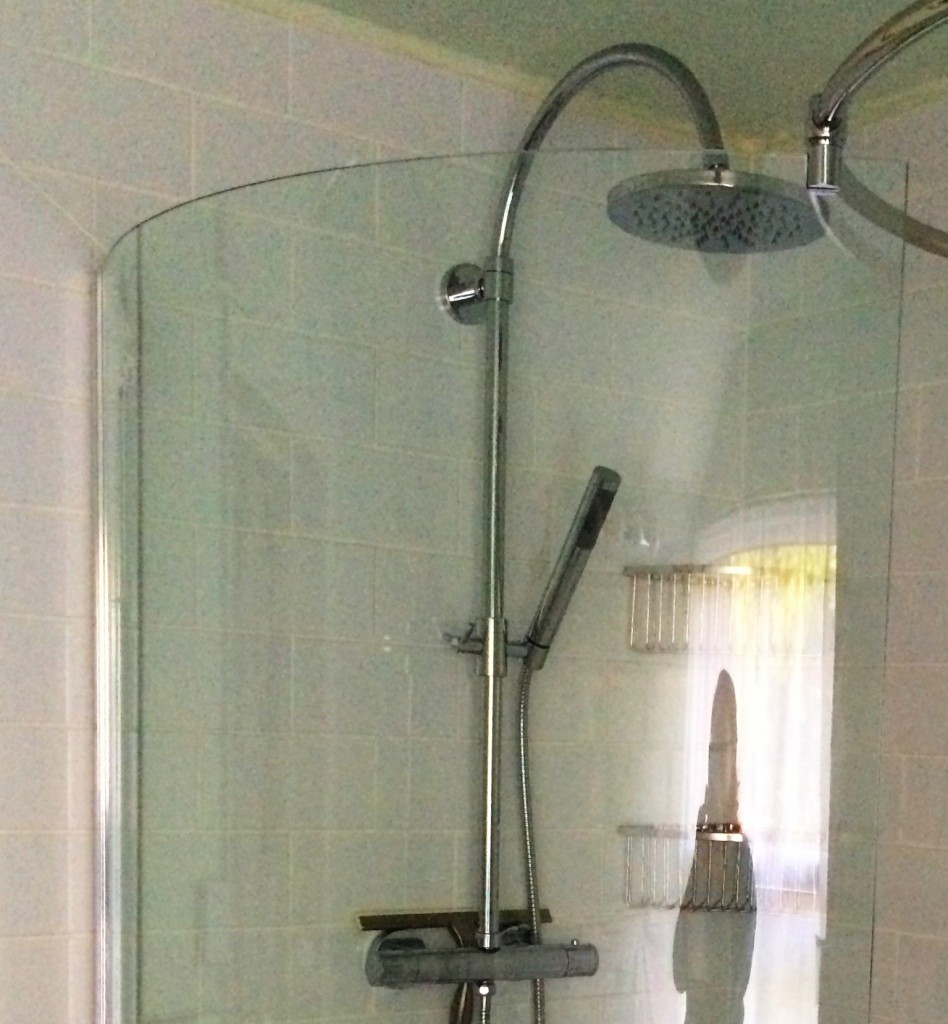 The shower has a thermostatic valve so that even if someone turns the tap on downstairs my shower will remain the same glorious temperature.

It’s a walk-in, doorless shower. It takes up quite a lot of floor space but only half of that space is actual shower. The rest is where you stand and drip. I debated whether the shower area was really big enough considering the floor space the whole shower uses, but I love the thought of not having a door on the shower, so here we are. Plus, none of that sticking door situation when the runners get clogged with scale. 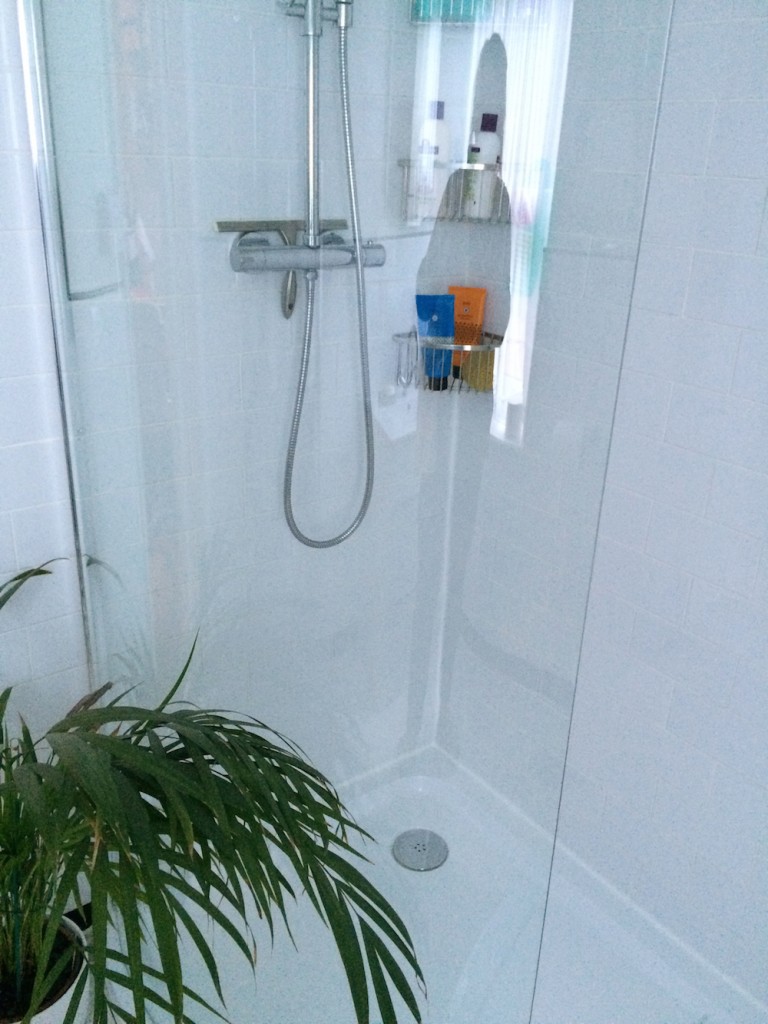 Ms Shower, we’re ready for your close up.

The builders fitted the chrome baskets for us as part of the general bathroom job.

The loo looks slightly grey in daylight, but looks bright white when you turn the bathroom light on, so that’s a bit weird. This wasn’t the design I originally chose, and it’s much more modern than I’d generally go for, but it was the best choice of those that work with a unit behind them to hide the macerator. (See earlier post on the Saniflo debacle.)

Looks fine now the plant’s on it, and it’s not as noisy as you might have expected.

Our new plant is doing an excellent job at camouflaging the gap between the top of the loo unit and the wall.

The basin is set into a compact two-drawer unit. I debated here too. Storage space is important to me. I like everything put away. I chose drawers rather than a cupboard so that it’s easy to find everything. But I wasn’t sure whether to size up for even more storage – this is the smallest at 60cm and there was an 80cm and 100cm version available. But then I was concerned that it would make the room feel cramped and drying off post-shower possibly a bit awkward. Now it’s in, I think we could have got away with the 80cm cabinet. 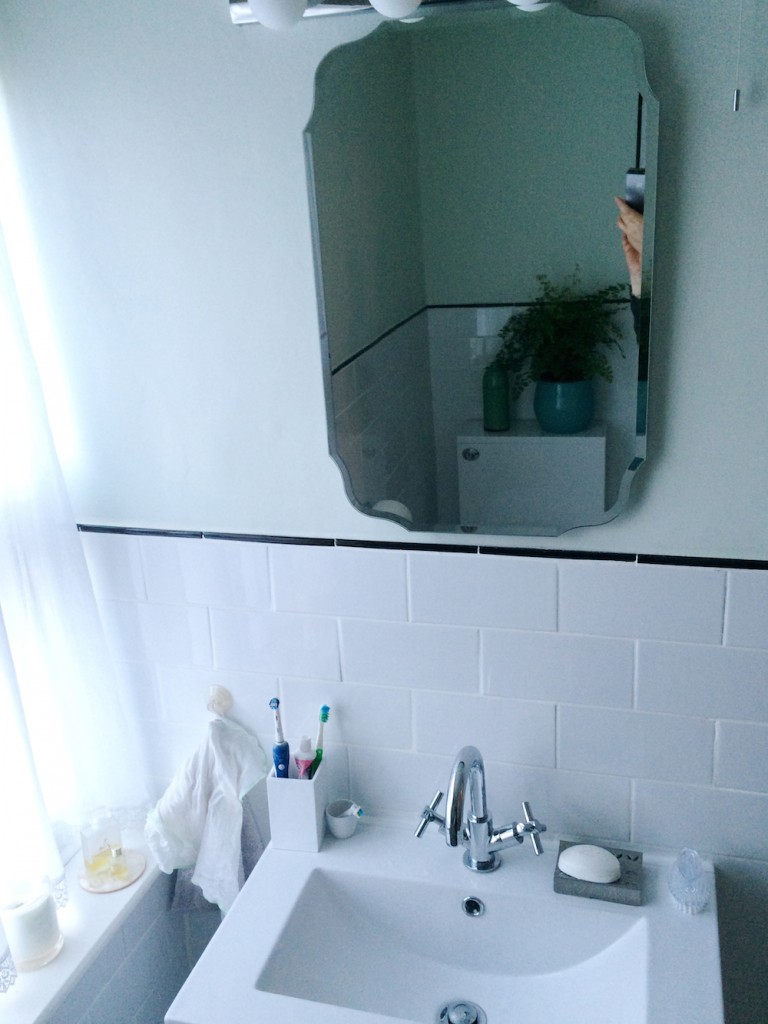 It’s really hard taking a photo of a mirror without being in the photo.

The mirror is a bit vintage, I know, but so pretty without being over the top. booyaa and I agreed on it straight away. The “dressing room light” over the mirror was one of my extravagances. It was a bit pricey for our budget, but it’s lovely. Not that you see can see much of it thanks to my dodgy camera work.

The towel heater, well, what can you say. It’s one job is to keep towels warm and dry. I bought one that seemed to be the right size for us, with a curve to make it easy to put your towel over it. That was it. 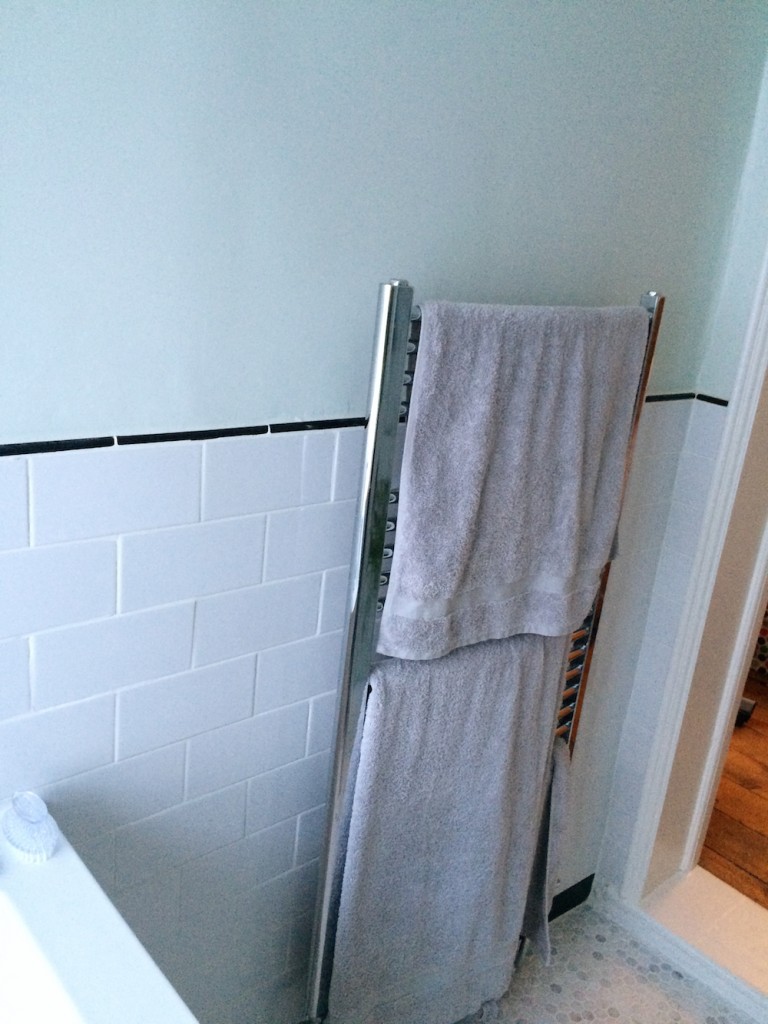 You’ll notice, possibly, that the sanitary ware is very modern with a combination of smooth curves and clean lines, whereas the style of the tiles and some of the fittings are a nod to the art deco era. This was very much on purpose. I looked at our options and saw that we could buy Victorian or Edwardian style sanitary ware, but art deco is almost impossible. So we went for all-out contemporary sanitary ware and the tiles aren’t bevelled, they’re a more modern take on the “metro” style. And then I crossed my fingers that it would all work together.

The paint is Farrow & Ball Pavilion Blue (the patch on the website looks nothing like the real thing). It’s a pale green in real life, and again was a nod to the very many green-tiled art deco bathrooms I saw doing my research. It’s not at all modern, crisp aqua, thankfully. I really wanted an old-fashioned warm green and it’s just that. The woodwork is all done in Wimborne White, which is a warm white and probably the wrong choice against all that clinical white, but it’s what we had so it’s what we’ve got.

We hung the door – hurray! – but we don’t have handles or a latch of any sort at the moment. Good job it’s just us two, eh? 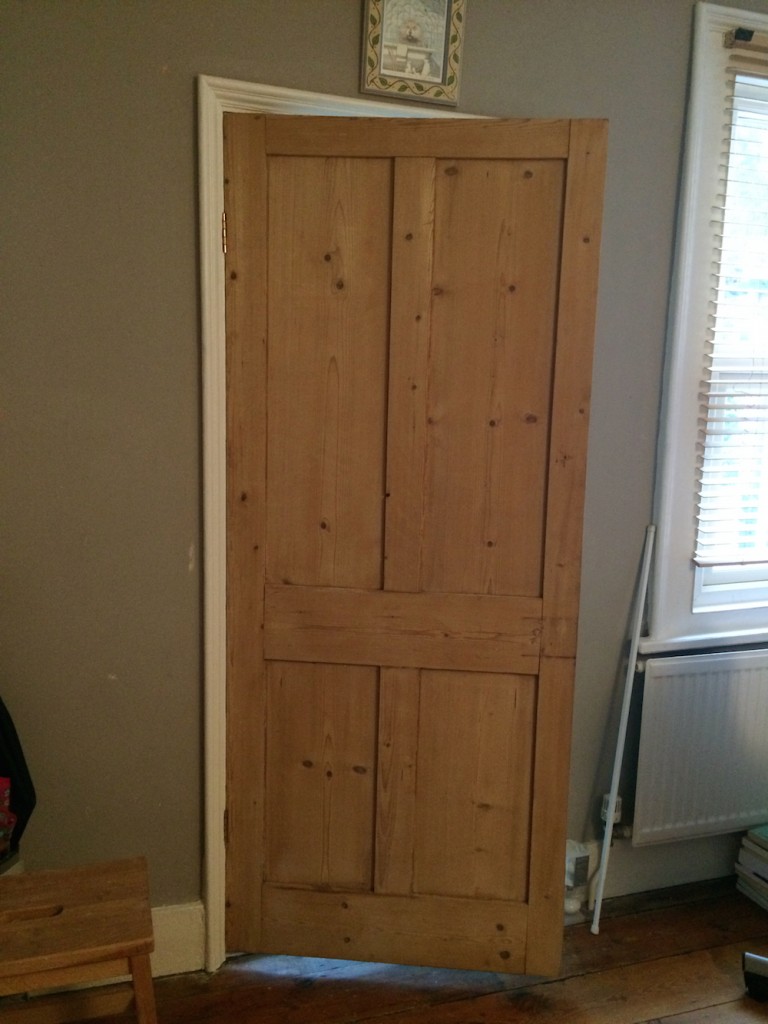 What’s the deal with the curtain? Well, after a number of very unhappy blind-fitting episodes, booyaa decided he didn’t want to fit any more blinds for a while. He’s obviously emotionally scarred by the last lot (in the bedroom). So I made a pair of curtains from some muslin and lace (about £9 all in from a local fabric shop) and used one of the stash of net curtain tension rods I’ve got. Bargain. It’s a bit weird. I keep thinking we should have a nice crisp blind but it does the job – we tested the opacity from outside when the light’s on inside, and it passed booyaa’s privacy test. 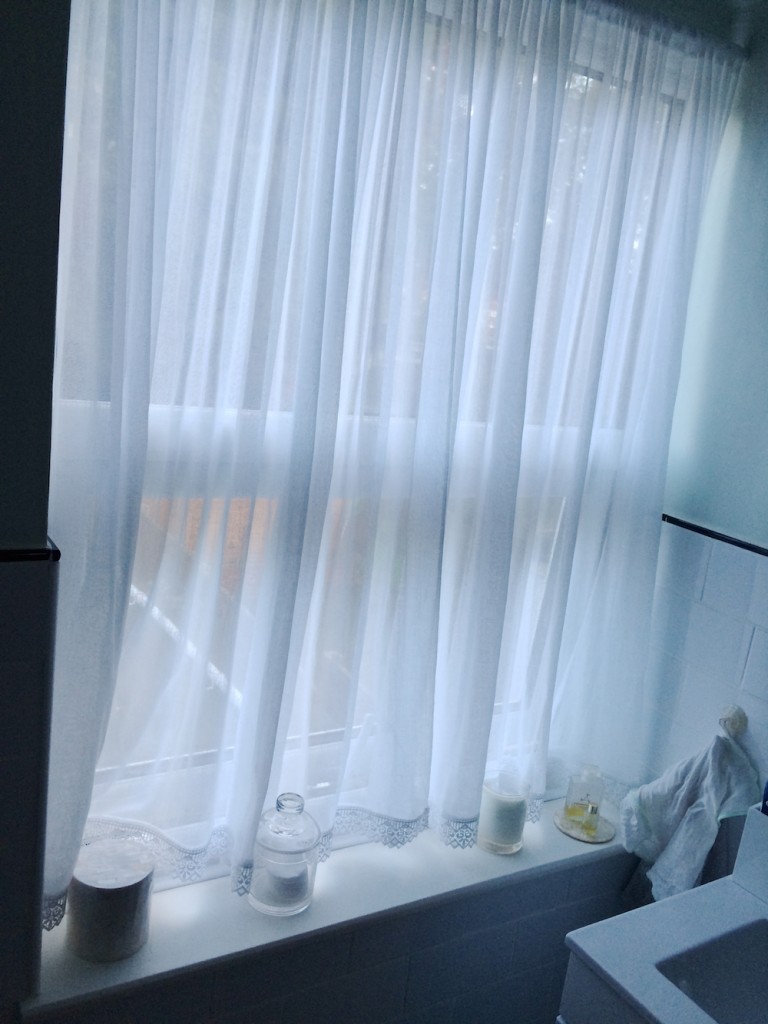 It’s curtains for you, sonny.

The title of this post comes from a song. Early 90s. You don’t know it? Fine. Make me feel old. (Dad: probably not one you’ll like. Don’t feel you have to listen.)

4 thoughts on “wash your face in my sink”