August 8, 2014before and after, home improvementsbathroom, planning, plumbing, projects, TIL, trades

The bathroom building begins! Here’s how week one went.

The plumber pulled up the floorboards, and investigated the existing pipework from the heating. He dismantled the boxing round the boiler and attached pipes to take the water upstairs.

First gotcha came along, with a problem of how to get the pipes from our main water entry point through the floor. An error of judgement during the planning stage meant they thought the boiler was under the bathroom-to-be, but it’s not. Directly above the boiler is the flat roof. A phone call to the boss resolved the issue. There’ll be some more pipework on show in the back lobby, but we care not a jot. It’s a place of passage, we won’t notice it. There’s going to be a small box in the kitchen to cover up where the pipes go upstairs, but again, we don’t mind. It’ll be fine once it’s painted. Plus, hopefully we’ll have the kitchen redone in a couple of years and we tackle hiding pipes neatly then.

We had to duck under dangling pipes to get into the downstairs bathroom, which was interesting. They’re now partly hooked up, so we’re free from accidental middle-of-the-night garotting. 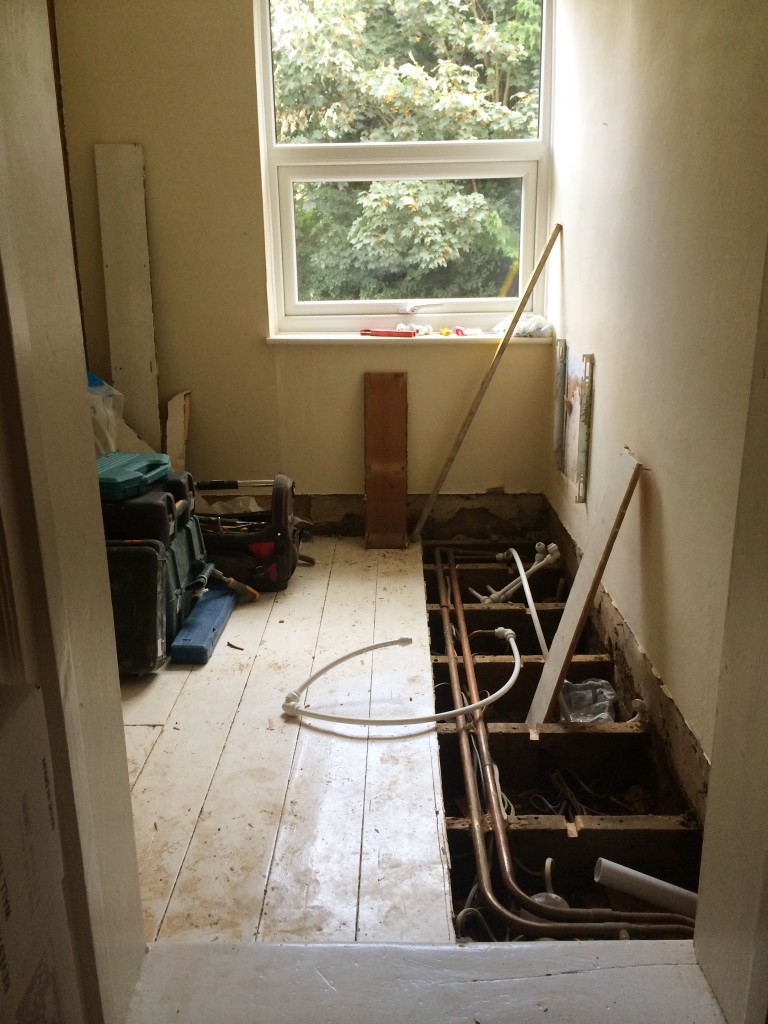 3 men with drills, stone cutters, hammers and chisels took the house apart. We have gaps in the brickwork, pipes dangling out of internal and external walls, great chasms cut into the walls of the bathroom.

starting to make holes in walls

The plumber spent the day finishing off the pipework. All the pipes are now in place and joined up. They’re not all fixed down, but we have water upstairs now. high fives

The electrics are half done with cables ready for the extractor fan and the mirror light. The socket and light switch have gone.

The floor is partly covered in ply, there’s a layer of cement and the shower tray is set into it. My first purchase to be used. Have I made the right choice? It looks smaller than I thought. minor panic

An hour later booyaa came home and said something along the lines of, “Whoa, that’s huge.” So maybe it was just bathroom planner’s nerves.

shower tray sitting on its cement base

The tiles are going on! It’s really starting to look like a bathroom. There’s a wall and a half done so far. They’re not grouted yet, so it’ll look cleaner with white grout instead of grey adhesive. 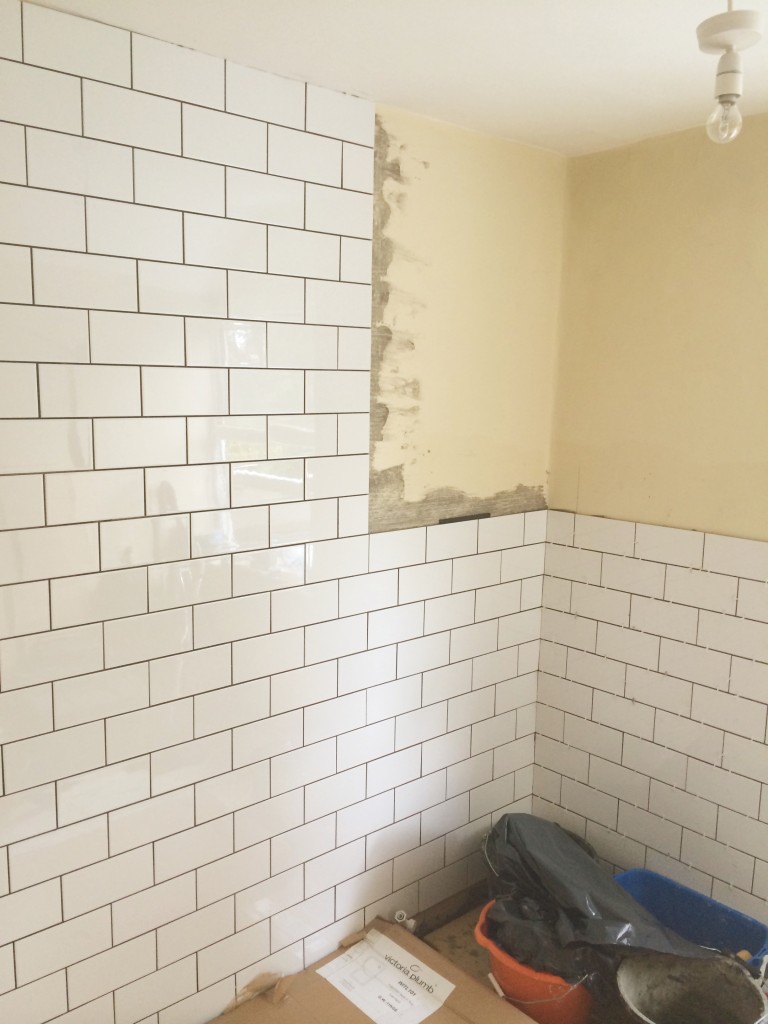 It’s very tempting to sing Down in the Tube Station at Midnight in here.

And that’s it until Monday.

Smaller tiles are fiddly and take longer to fit. Which is obvious when you think about it. But if we’d chosen large format tiles, as is the trend these days, they would have looked horrendous because of our wobbly walls. The plumber, with his tiler’s hat on today, said we’re much better off with smaller tiles. He’s able to compensate for the bumps and lack of square corners. If we’d used large format tiles they would have been wonky, or, presumably, we’d have to have the walls replastered first.