The floor in the living room is laminate straight over concrete. A couple of the neighbours have concrete floors in the front room, so I think something must’ve happened to make people rip out the wood and lay concrete. (Flood? Though I can’t see how the river could get this far. Really bad woodworm? Possibly. After all, there was woodworm elsewhere in the house. Some bonkers 1960s craze? Who knows.) 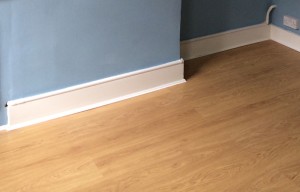 Anyway, I’m sure you can imagine that makes for a cold, cold floor. Not such an issue in summer, but it was very chilly when we moved in early Spring, and we’re not looking forward to an icy floor through the depths of winter.

Because the floor’s concrete we don’t have much room to manoeuvre. We don’t want the whole pneumatic-drilling-the-floor kind of work, so we had to find a way of insulating and recovering in less than 2 inches before the door wouldn’t open. You can buy sheets of polystyrene insulation which are about an inch thick. Bingo.

So, this week the builders came and took off the skirting boards and lifted the laminate flooring. Then the gas engineer came to move the gas pipe, which was running along the top of the skirting boards, and lay it out of the way for when we get a woodburner. This step wasn’t linked to the new floor except that since we’re lifting the floor it seemed like a good time to do it. (You can see the pipe above the skirting in the photo at the top.)

One wall of skirting had been routed out to hide some cabling. We didn’t see that until it became clear that the skirting was somehow tied to a plug. Interesting. 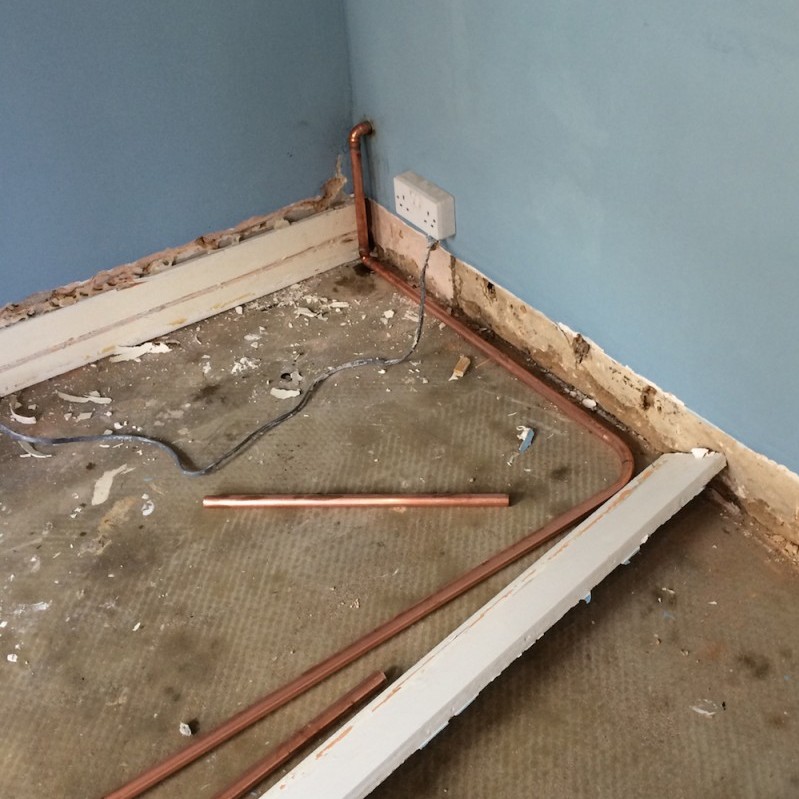 The next day the sheets of insulation went down, followed by half a tree of tongue and groove. The old skirting boards were reused. The badly damaged pieces were flipped over. We considered getting new skirting but we had enough to reuse so it seemed pointless to buy new.

And now it’s time to sand everything, floorboards, skirting, cupboard doors, the lot. Then we’ll be repeating the process from the dining room of staining and varnishing the floorboards. Cue aching arms by Sunday evening.

The stickers on the floorboards were an absolute nightmare to get off. I tried a combination of damping them with water and scraping with a metal spatula and soaking off the adhesive with rubbing alcohol. I was concerned we’d end up with square patches, so, while I sanded the rest of the woodwork that I’d started on Saturday, booyaa sanded all of the floor with the orbital sander.

By then we were both exhausted, but we found enough energy to stain the floor. That was my job. When you start painting on the stain you panic that it’s horrendously dark and artificial looking and you’ve made a huge mistake. But we remembered feeling this way with the dining room floor and that turned out really well once it was finished. And, as I carried on painting myself out of the room, the first boards were drying and starting to look like old pine, as planned. 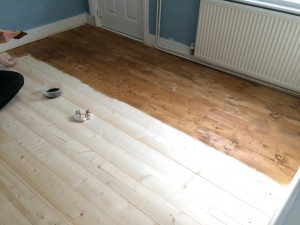 action shot of me painting on the scary brown stain

Then I went to have a long, extremely welcome shower while the stain dried. Then first coat of hard wax went on. That was booyaa’s job. It’s really hard work. You have to drag the applicator in one firm sweep from one side of the room to the other, with no stopping and going back over because that will make it patchy. It takes 4-5 hours to dry, but we’re leaving it overnight to be on the safe side.

Clean up time and dinner. Luckily dinner is easy. So very tired.

Tomorrow the second coat of hard wax varnish goes on and we’re done.

tongue and groove stained and varnished

The wood isn’t as attractive as the wood we have in the dining room. They’re different products from different places. In the dining room the grain is really nice with a few knots and the planks are quite wide. The living room wood is narrow, it was much paler to start with so the finish is lighter now, and there aren’t that many boards with attractive grain. The knots are weird, triangular shaped, like the wood was cut at an angle. I’m pleased that most of it ends up being covered up by rugs and furniture. But is it warm? Because that was the main reason for doing this. And the answer is: yes it is! I mean, it’s not like having underfloor heating (I wish) but it’s markedly less chilly than before.

And now it’s time to paint the living room. I’m getting fed up of spending my evenings at the dining room table.