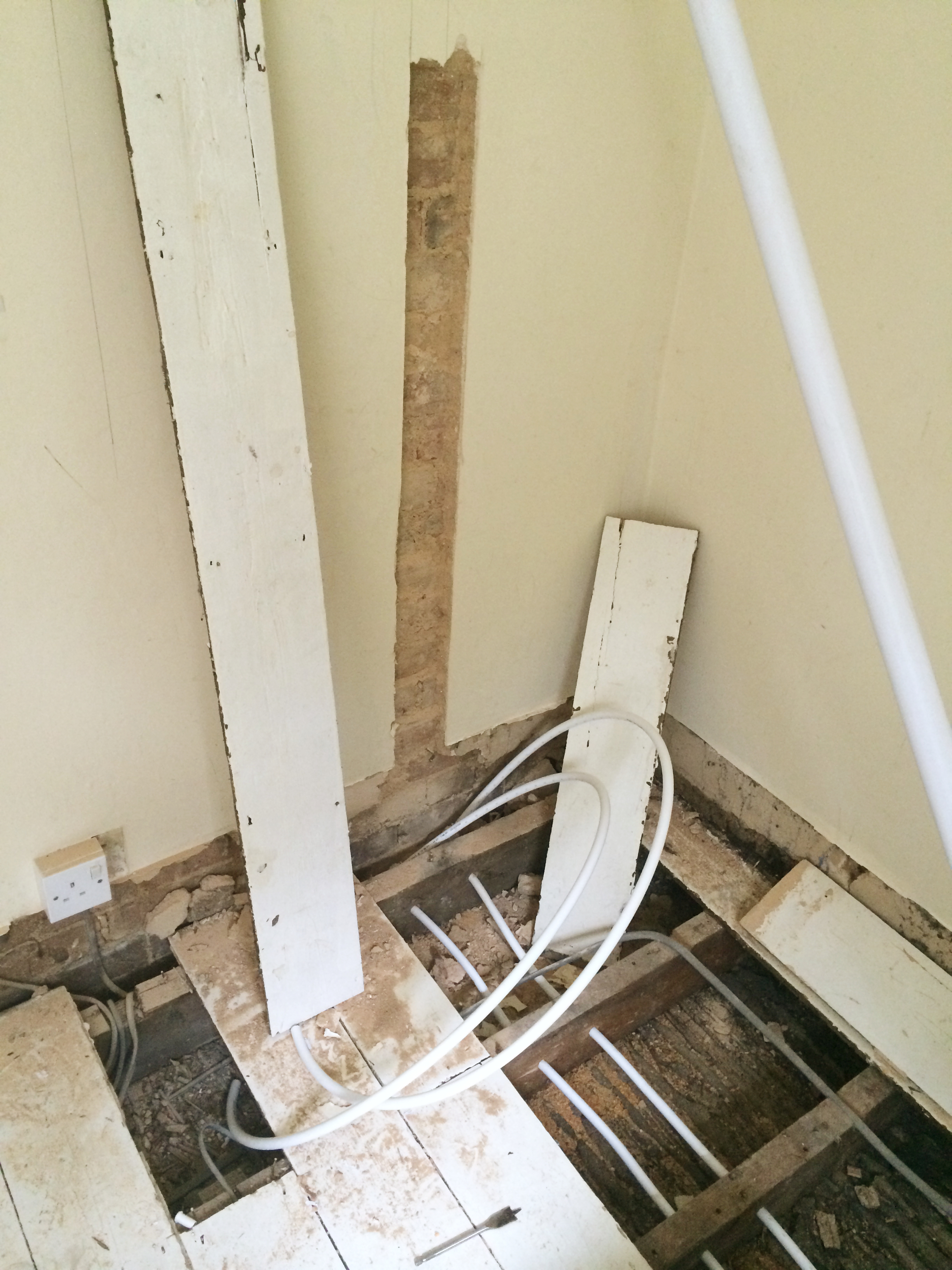 August 8, 2014before and after, home improvementsbathroom, projects, TIL, trades

We decided we wanted a bathroom upstairs. We had no idea how much it would cost, but going to the loo in the middle of the night with the perilous staircase we have, well, it’s not much fun. Having a shower in the bath? I’m so over it. Time for a real, walk-in shower. We considered upgrading the downstairs bathroom to have a decent shower in it which would have been a relatively cheap upgrade, but that wouldn’t fix the coming-downstairs-half-asleep issue.

So we got some quotes from bathroom fitters, took the one who actually turned up when he said he would, and got planning.

We didn’t go to a one-stop bathroom shop as I expected that to be really expensive. It’s undoubtedly more stressful doing it yourself, but it means we got to choose our products from the places we wanted them from, rather from the range a high street bathroom shop offers. I felt like the bathroom fitters were advising me on the best I could have for my situation, not on what would cost the most, because they would only get paid for the work they did. It made no difference to them what type of taps I wanted.

Going through our requirements and wishes with the bathroom fitters meant changing a few things I’d chosen as they wouldn’t work. There were a couple of issues I hadn’t considered. Things I learned:

If you currently have a bathroom downstairs in an extension added on to the kitchen, and you’re planning on installing a brand new bathroom upstairs you need to consider how to get the water up there and the waste back out again. You will probably need to put pipes up from the kitchen or wherever your boiler is through the ceiling and into the room above. You might end up with a few pipes running up the wall in your kitchen or new boxing inside a kitchen cabinet.

There’s a minimum ‘fall’ required for waste. So you can’t have a straightforward horizontal pipe from your shower running under the floorboards to join the pipes that run down the outside wall, as it’ll just clog up. And without putting you off your breakfast, the toilet is an even more tricky matter. We were persuaded that a Saniflo was our only option without having to cut the backs out of kitchen cupboards to accommodate some considerable boxing. We plan to renovate the kitchen and remove the existing bathroom, but we can’t do that yet, otherwise we could combine the two projects and resolve the waste issue. Never mind. Saniflo it is. (Don’t read the Mumsnet thread on the joys/horrors of fitting a Saniflo if you’re remotely squeamish.)

The floor is at a slight angle in that room – great for shower waste, not so great for getting nice neat rows of tiles. Equally, wobbly walls with crumbly plaster. Fun tiling times! The tiler tells me that smaller tiles are more accommodating for getting a good finish on wonky walls. Big tiles are quicker to fit. We’ve got brick tiles which he says are fairly forgiving, as long as they cut well. Another “who knew!” moment – different tiles are more/less easy to cut. It’s obvious when you think about it, but some are fragile and will crack raggedly. Others make a good clean break. Our marble mosaic tiles are probably not cuttable, so let’s hope the hexagonal form fits round the curved shower tray.

Despite it being an old house we don’t need to strengthen the floor before we put in the sanitary ware. I had assumed we would. There’s a lot of very heavy stuff going in that room. But two different plumber-builders said it’s not necessary, so let’s trust them. They will seal the floor with plywood sheets before they tile, but we could have had that done under the floorboards and not had floor tiles. That would have been a much cheaper option, so consider that if you like the painted floorboards look and are on a tight budget.

I want a super-drenchy shower so we need a pump. In our case it’s getting installed next to the boiler downstairs and will kick in automatically when the hot water is turned on in the upstairs bathroom. The pump is a pricey piece of kit, but unless your house is blessed with amazingly high pressure water flow, you’ll need one for a decent shower experience. Especially if the boiler is downstairs. If you have a water tank in the loft you might be ok. Aah, gravity.

So that’s what I learned. Here’s what we had to do to get this ready.

The study never really finished becoming a study. I worked in there a few times but thanks to foot-thick walls (sturdy house, this) the wifi signal collapsed before it got to my desk. So I mostly worked at the dining room table. I never finished unpacking and sorting everything out. It became a bit of a dumping ground for things that didn’t have a home. When we made the decision to install the bathroom we started creating a study corner in the guest room, but never dealt with the random stuff left in the ex-study.

The week before the bathroom fitters were due to arrive we finally faced our demons. We opened the boxes and sorted them into bin/recycling; find a home for them in the house; repack and put the box in the loft. We tidied the guest room and organised the boxes of bathroom stuff so that the plumber and tiler and whoever could actually get in and do their work. 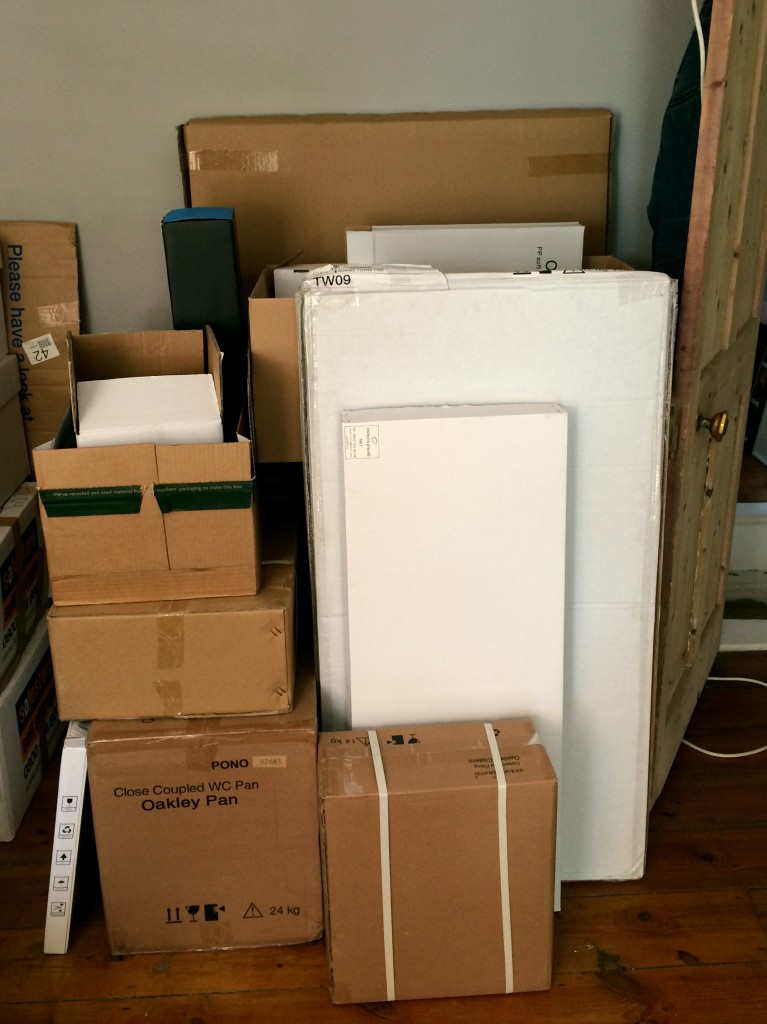 boxes of sanitary ware and fittings 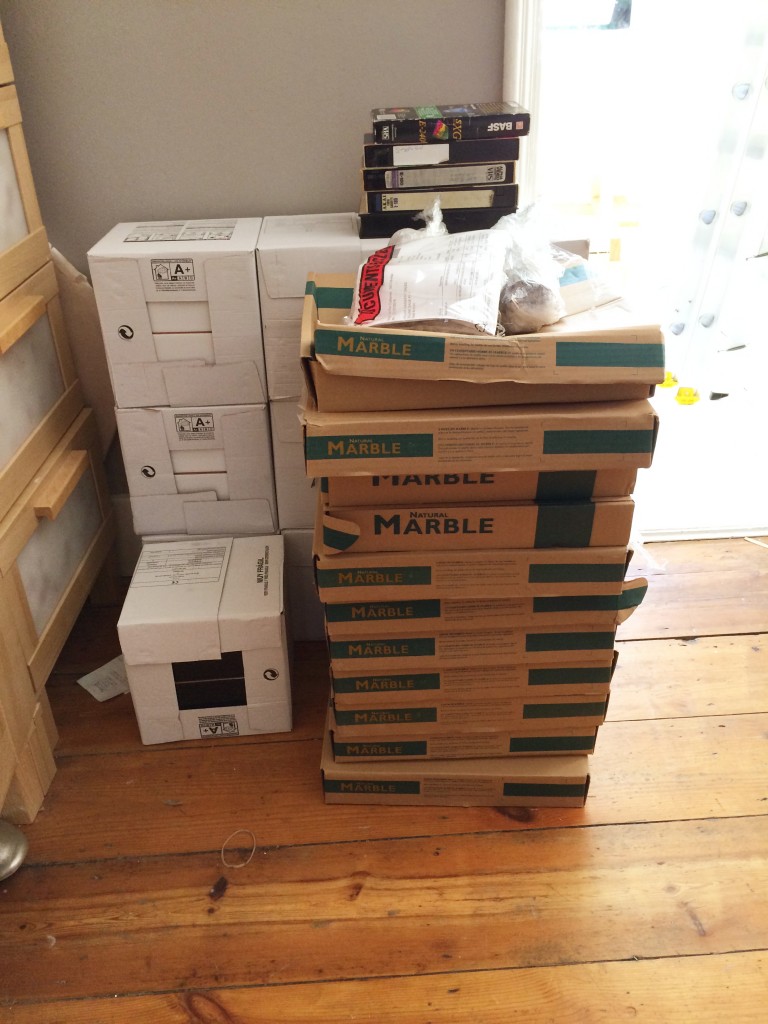 NEXT: bathroom fitting, day by day.