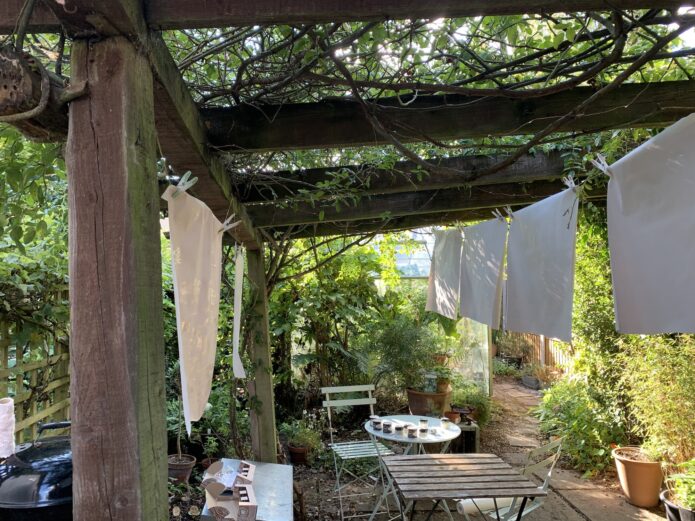 It’s been an odd few weeks. When we moved here it was scorching hot. Today’s it’s chilly and misty. We’ve done loads in the house and yet we’re still digging through boxes to find things we need. We’re getting to know the house, the garden, the village and the neighbours. In some ways it feels like we’ve been here forever, yet there are new things to learn every day.

One thing that’s also odd but very welcome, is that we all feel really settled here. Betsy was the least flustered by a new house I’ve ever seen her. When we go on holiday – usually to a cottage somewhere on the coast – she meeps and paces for the first two days. We take it in turns to go downstairs with her overnight. But here, she was cool from day one. We think it must have been because all our furniture was here, so although the house is different, all our things were the same. But who knows with Betsy. She’s already got her routines, with places she likes to pee and places she avoids. She certainly enjoys digging up the veg patch…

We’ve spent a couple of evenings with our neighbours and that’s such a change from the last house where we all avoided each other. Another neighbour put us in touch with a tree surgeon and he’s ready to take down the huge horse chestnut once the council gives us permission. We’re in a conservation area so although none of the trees have TPOs we have to advise them that we’re going to remove them and hope that they let us. There’s a local handyman who’s going to help sort out a few things to keep us going until the big building work starts. Things that we can’t do on our own he’ll show us how to or work alongside us. It’s going to save us a small fortune. All these things add up to feeling really glad we did this.

The house has a damp problem. We knew this when we bought it. There are a number of reasons. One is that the house is constructed from clay lump on a solid flint base, and that’s just how it is. But there’s a list of things that previous owners haven’t done or have done wrong and they’re exacerbating the problem. We’re tackling each issue as and when we can. The first thing we did is clean all the very damp areas with a mould treatment. Let that dry and then painted a protective layer. We can’t seal the damp as that will make things worse, we need to enable the house to breathe. Windows open, heating on the lowest we can manage, little things like that will prevent condensation building up. On a more substantial level we’re getting the chimney repaired and capped so that damp doesn’t come through that way. We’re going to need to replace the felt in the roof as it’s not breathable so is causing condensation in the roof space but that would mean taking all the roof tiles off and we don’t want to do that until next year, at the same time as the extension roof goes on. So we’re getting a special vent put in which will increase the ventilation up there, and having some moss scraped off the roof tiles to prevent rainwater seeping in that way.

I’ve been trying out paint testers. I thought I knew what colour I wanted but the light in the house is not what I expected. I thought it would be very warm, yellow light, because we’re south facing, but turns out most of the walls have a greyish tinge. So it was back to the drawing board.

So far we’ve only painted one room and that’s not finished. Thanks to the pandemic there’s not much paint available to buy online. (I’ve been told by someone in the know that the big paint companies have run out of tins due to a supply chain issue so they can’t produce the paint…) so we painted the walls and I’ve got some primer ready to do the woodwork, but I haven’t got the matching paint for said woodwork. We’ve got some shelves up, changed the lights, put down our rugs, done all sorts of small things to make this more like home, but there’s not a single room or project that’s completed. It would be nice to finish something.

I’ve spoken to four architects so far to help us work out the floorplan for the final renovated and extended house. That’s very exciting for me. I’ve watched a bazillion home renovation/self-build tv programmes and finally it’s happening to me! So exciting.