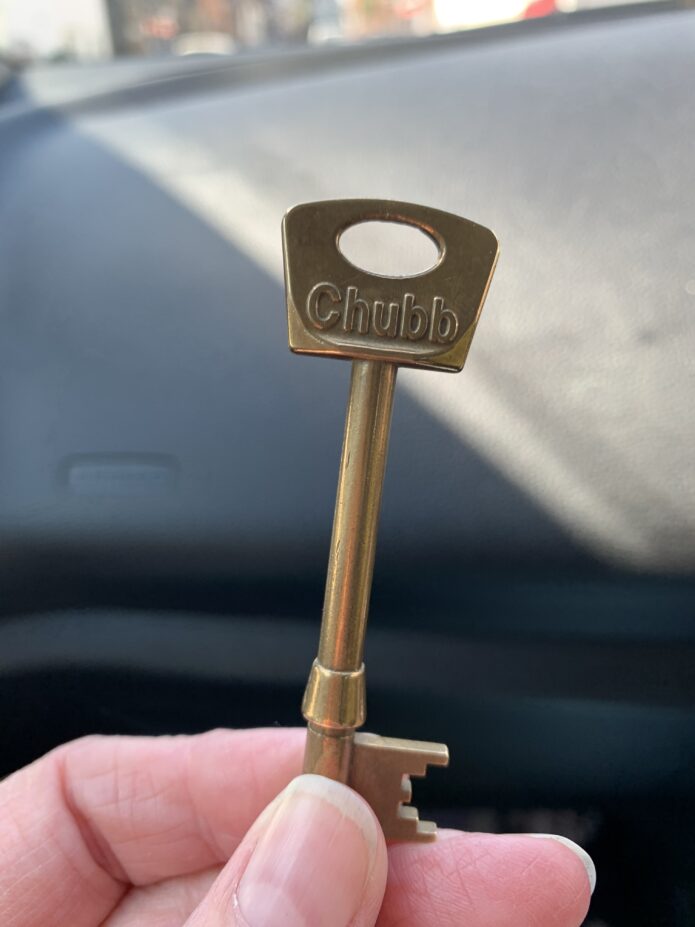 It’s a two bedroom semi, built using local materials and in the local style. The first two feet of the house are brick and flint, followed by clay lump, but it’s all hidden behind a gruesome pebbledashed and painted render. It’s in a very poor state of repair as the previous owner did nothing to it in the thirty years he lived here, so we’ve already started on the remedial work to get it habitable over winter.

We’d originally planned to move in March which might have given us time to get the extension and the bulk of the remedial work finished before winter. But first our buyer withdrew his offer at the last minute (literally the day before we were due to exchange) and then the pandemic hit and everything stalled. So the new plan is to start getting things ready to build in Spring next year. In the meantime we’re doing bits and pieces as we come across them.

The first major outlay will be for a gate across the end of the drive and some ‘invisible’ fencing to keep Betsy safe. We’re having what is known round here as rabbit fencing – rough poles and chicken wire, pretty much – fitted snug up to the existing but patchy hedge. We could probably do this ourselves and save some money, but we have quite a lot going on and decided it was more important to get it done quickly. Once it’s in I’ll plant an inner hedge which will hide the rabbit fencing. The dog can’t get out, we don’t need to rip out and replace the existing hedge, and we’ll have a pretty, scented hedge from our side. Everyone who’s come to quote has looked at me like I’m mad, but it makes sense to me, so… We’ll be making sure there are a few gaps for the local hedgehogs to get through. The village has a fairly extensive hedgehog highway system, and our neighbours have already asked us not to block the gaps in the hedge, as they’re well used. We’re yet to see any hedgehogs, but I’m looking forward to having some spiky visitors. Most people round here have farm gates across the end of the drive, but we’ve gone for palisade (rounded picket fencing, like we had in number eight version one) again to keep Betsy safe. I’m not especially looking forward to painting it once it’s installed, as I recall it’s quite time-consuming to paint each individual strip of wood, but it’ll look cute and cottagey.

We’ve been here for 3 weeks and we’re still surrounded by boxes as we don’t have anywhere to put anything. We’re waiting for a (very delayed) delivery of a few bits of furniture and storage kit so we can get the kitchen sorted out, unpack our clothes, and empty the remaining boxes. It’s all taking longer than I’d expected, but it’s taken so long just to get here – it’s been almost 9 months since we first saw the house – that I don’t think a few more weeks will matter.

On the DIY front so far we’ve pulled up a carpet and painted one room (the bedroom), put up some shelves and ordered a new thermostat for the immersion heater. Mark’s done an amazing job of organising the shed outside the back door so everything is easy to get hold of. He’s also taken on the daily tomato watering. The previous owners left us their greenhouse and although they harvested everything that was ripe before they left we’ve had a non-stop supply of tomatoes, as well as runner beans and courgettes.

We’re in a private lane of just 7 houses and so far have met 4 of the other households. They’re all lovely. We’ve had flowers, a bottle of prosecco and a couple of welcome cards. When we take Betsy for her daily walks we meet other dog walkers who always say hello, and even drivers wave as they pass. Everyone in the village seems friendly and kind. We knew this would be a good place for us. Just got to sort this crumbling old house out and we’re set.