The floor. I know. You all want to know if it’s finished. Well, no, it isn’t. We hit a snag with the wood hardener. It wasn’t quite as magical as we’d hoped. We need some strips of wood to jam between the most damaged boards before we can get on with the wood filler. So. Postponed while we find wood of the right size.

After much gnashing of teeth at the floor situation, this weekend we decided to get on and do a few other bits and pieces so it feels like we’re making progress.

I’ve put/am putting new accessories in the bedroom. The walls change from mid-grey to almost lavender, depending on the light and the old duck egg and teal colours didn’t look right, so they have now all gone. I’ve replaced the lamp shades so we have mismatched lamps but matching shades in a non-committal ivory. The light is much nicer in there at bedtime now. The duck egg shade used to make it look eerie.  I’ve bought some big cushions to lean against. Iron bedsteads are all very quaint but they sure are uncomfortable for reading in bed. They’re antique pink (according to the label) and I’ve got some scatter cushions in a dusty mauve colour. And I’m knitting a throw for the bed. That’s a pale grey, so all together the new accessories should work with the paint colour. And I’ve bought some super chunky yarn to knit bedside rugs to replace the now exiled turquoise ones. (Here’s what I’ll be making.)

booyaa  tackled the disaster zone that was the guest room. It had become a bit of a dumping ground and wasn’t working for anyone. When we get the bathroom fitted I’ll be kicked out of my study (currently in the smallest bedroom, which is off the guest bedroom). We plan to have a study corner in the guest room until we can afford a loft conversion. So we’ve moved towards that, with the general junk, half-unpacked boxes and stuff that just needs dealing with currently stacked in the littlest bedroom and I have a neat and functional study corner set up. We still need to clear the half-unpacked boxes so that we can have the bathroom fitted, but I think we’ll both be more motivated to do that than we felt at the state of the guest room. Because nobody is coming to visit for ages, it feels very low priority. (Though it wouldn’t surprise me at all if my parents turned up out of the blue one of these days. Hi Mum! Hi Dad! So we should probably sort out the sofa bed just in case.)

On Sunday we had a well-deserved lie-in. By the time we’d had our bacon/facon sandwiches and 3 cups of coffee and were ready to get out into the garden it was scorchio! It really was exceptionally warm. We did about half an hour before giving up and deciding to postpone gardening until later in the day. 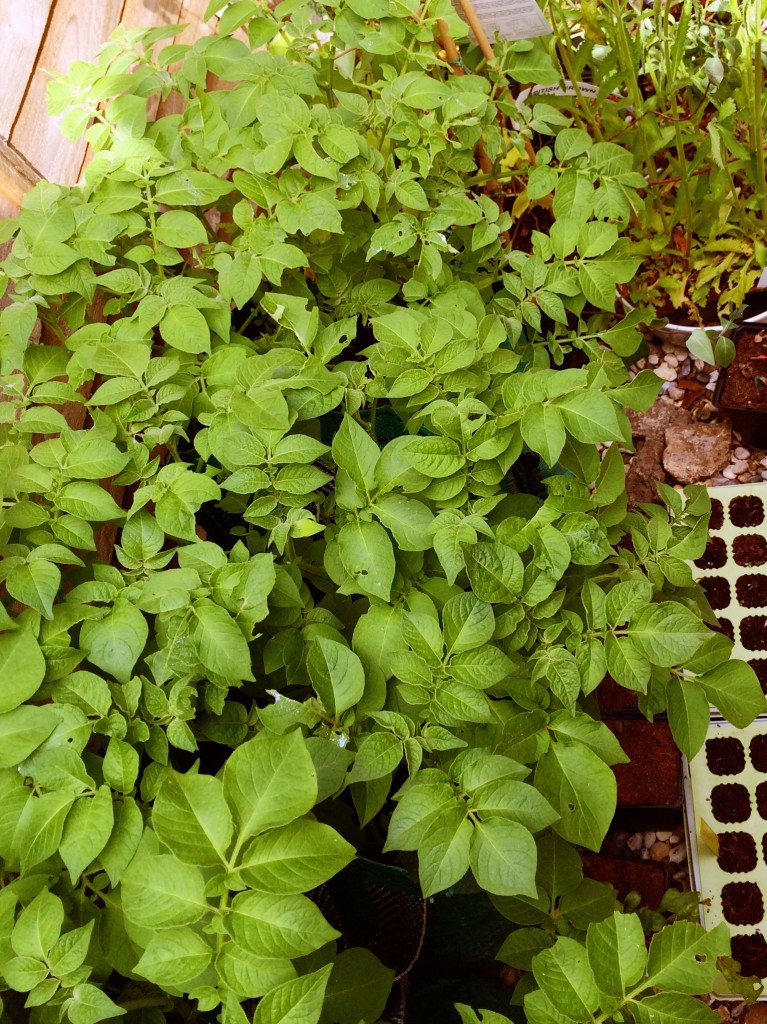 potatoes looking lovely in their bags

We finally got out there around 3.30 and worked together for a couple of hours. Then booyaa kept going while I came in and got dinner ready. 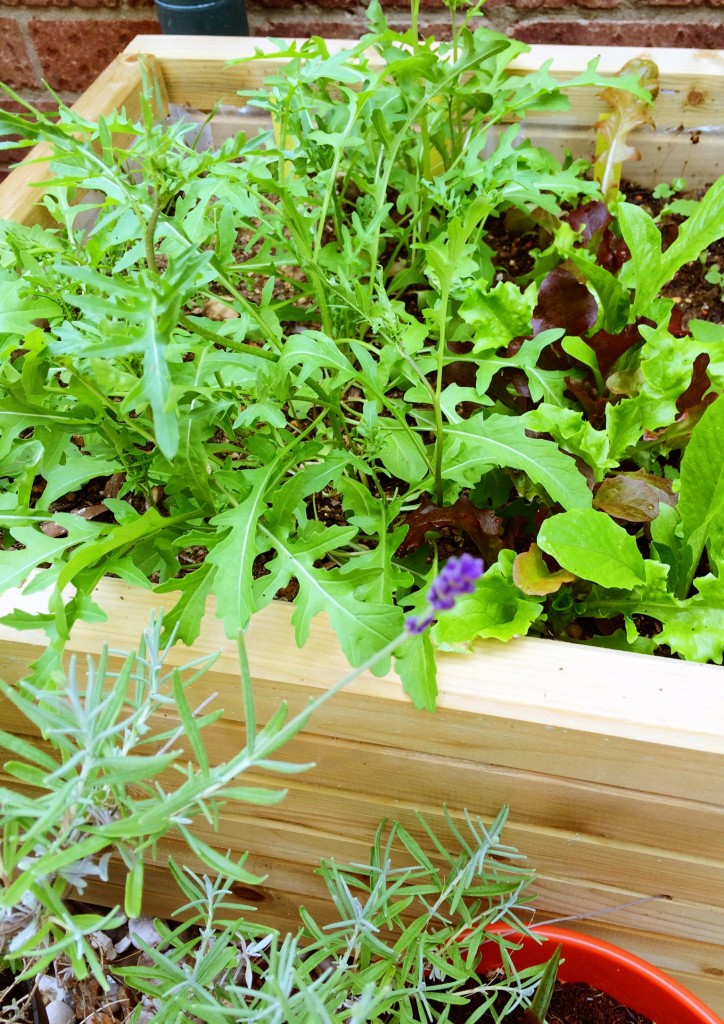 We marked out the first flower bed and raked the gravel from that area into a huge pile on the other side of the garden. We cut away the semi-circle of landscaping fabric and got our first view of what the gravel had been hiding. As he was forking it over booyaa hit a few mammoth roots. They must be tree roots. We’re talking 2 to 3 inches across. There were also roots of a smaller plant dotted about. We have no idea what these are but they were alive and trying to grow despite being completely deprived of light. Bless them. But we ripped them out because, well, we don’t know what they are but they’re certainly tenacious. If we let them grow they might take over the entire garden. 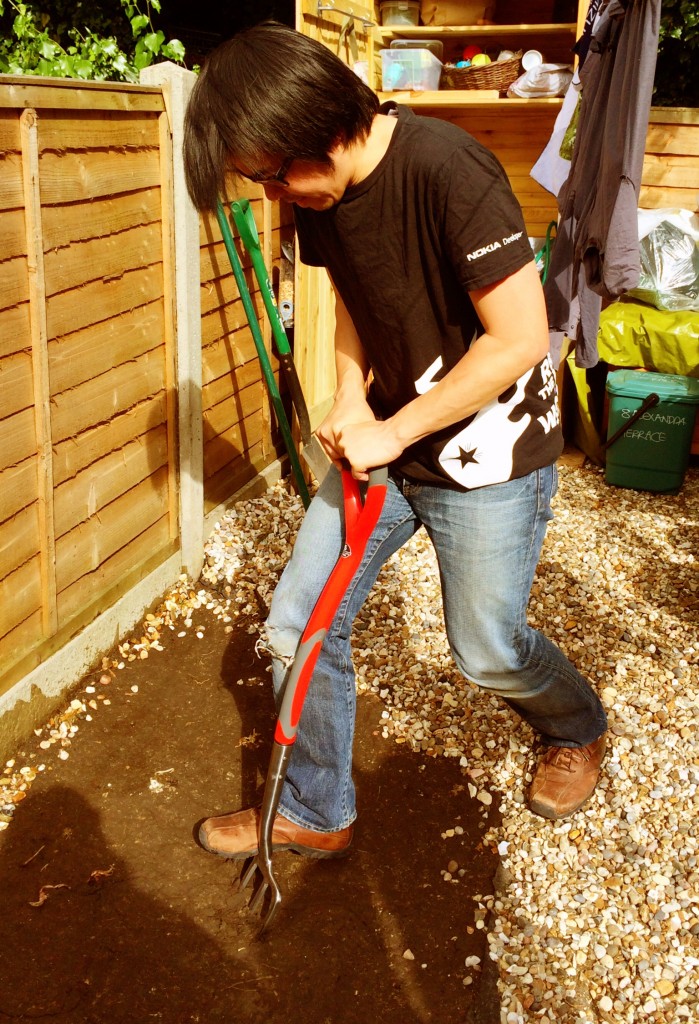 booyaa digging into the recently uncovered earth under the gravel

booyaa added some fertiliser and soil improver and declared the soil in good condition. We lay out our plants according to the sketch I’d made weeks ago. We placed the permanent and long term plants first, giving them enough room to grow. Hopefully. Then the short-lived perennials and annuals could be dotted about at random.

We’ve got a number of plants that we’ve been dragging around in pots for years, and it was good to give them all a real home. There’s a clematis that has flowered once and looked to be on its deathbed since I first bought it five years ago. A mock orange that’s desperately outgrown its pot. A star jasmine that rallied after a very cold winter nearly finished it off a few years back. All of those have gone in the new flower bed. We’ve also got a new honeysuckle, which already has powdery mildew, and a miserable looking dogwood which hopefully will perk up now it’s out of a pot, and give good colour in winter. 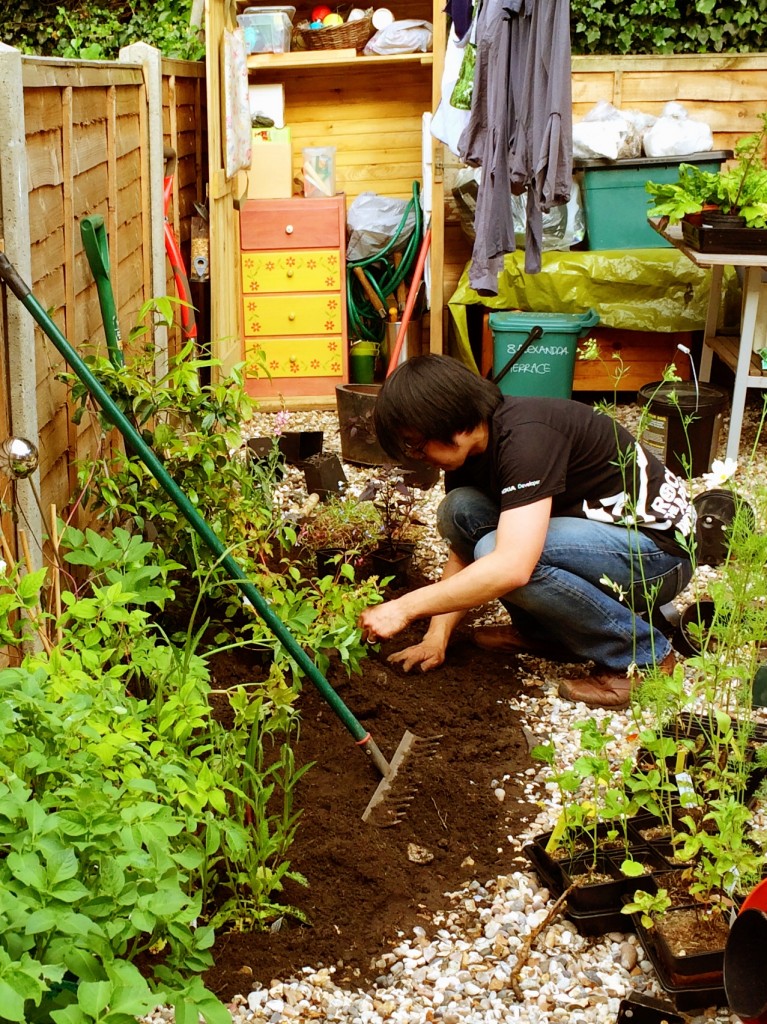 The annuals and short-lived perennials we’ve put in include cosmos, gauras, verbena bonariensis, angelica and nigella. Most of them are white or pure foliage, with a few splashes of pink, blue and lilac.

We were surprised at how much space was left when we’d finished planting everything out. So we emptied a few packets of sow in-situ seeds at the end. We’ve got some poppies strewn through the centre and alyssum round the edges. 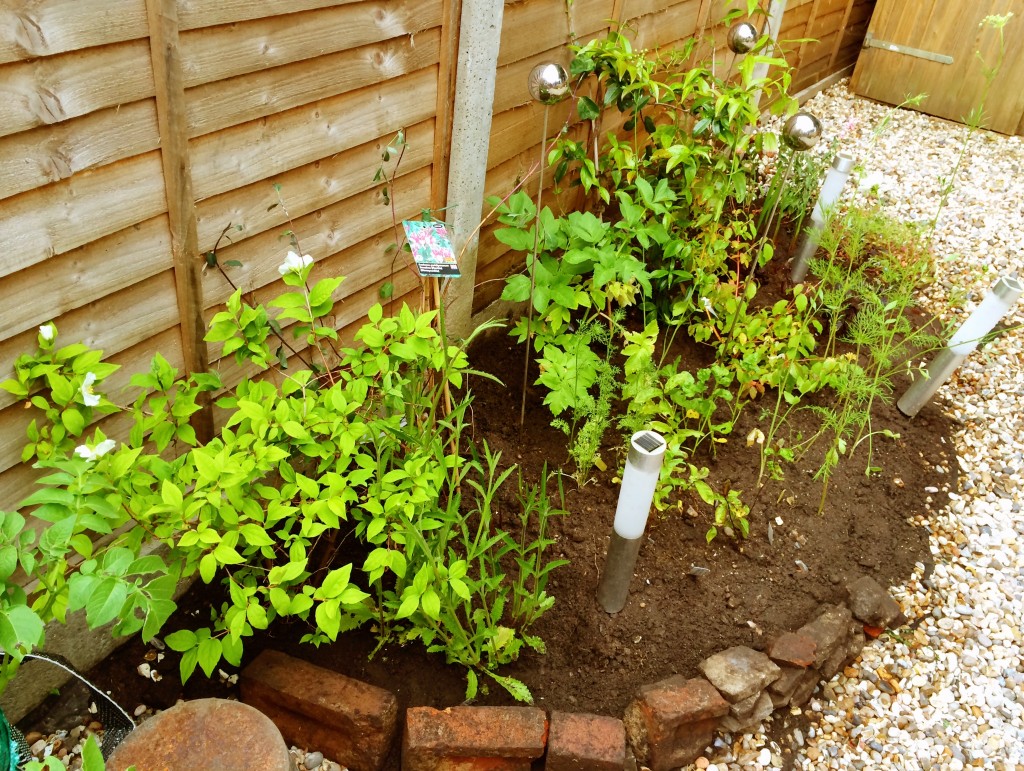 And that’s the garden finally feeling like it’s becoming a garden. I’m looking forward to lazing on the lounger out there with a cool drink and a book. 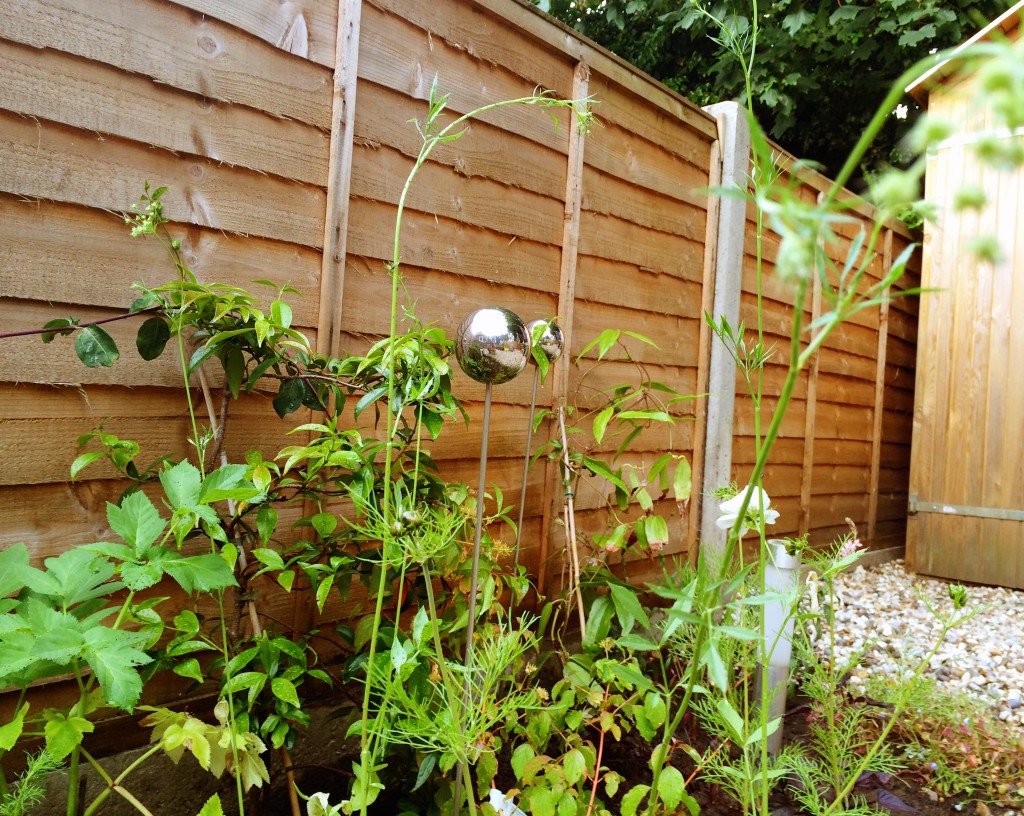 from this angle it almost looks like a flower bed