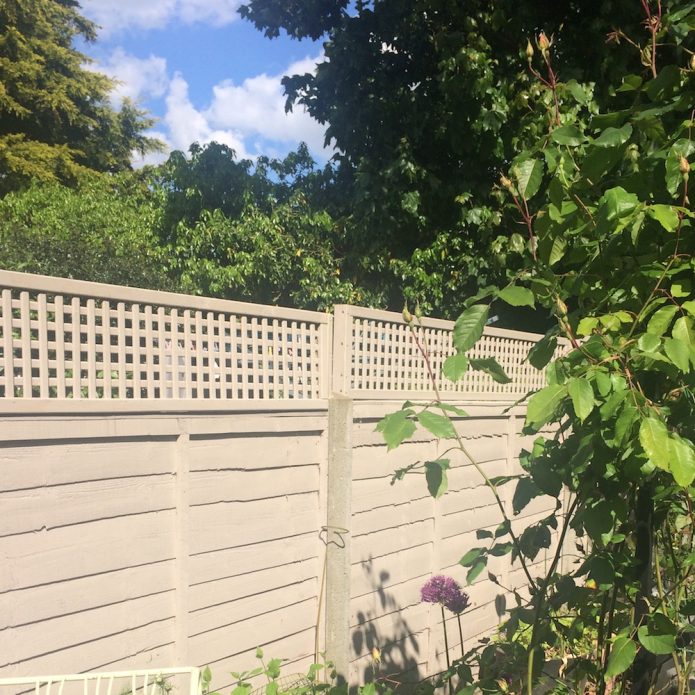 There was a problem with the blog hosting and I couldn’t create new posts. It was so far down our priority list to get it fixed that it’s taken us the best part of a year. Anyway. We’re back now. I’ll update you on all the super exciting* stuff over the next couple of weeks.
*May not be actually super exciting.

Most of you are aware that the neighbours on one side can be somewhat obnoxious. The 20-year-old son hangs out in the garden with his friends for very long periods of time (like 11am to 11pm) and their conversations are loud and frequently offensive. They all smoke and our garden reeks of weed. So, we’ve had numerous run-ins with the mother, who is very apologetic but ultimately does nothing about it. After our last, and biggest spat, at the end of summer last year, she put up some reed screening. She stapled it to the fence then added delightful garlands on top. *cough* 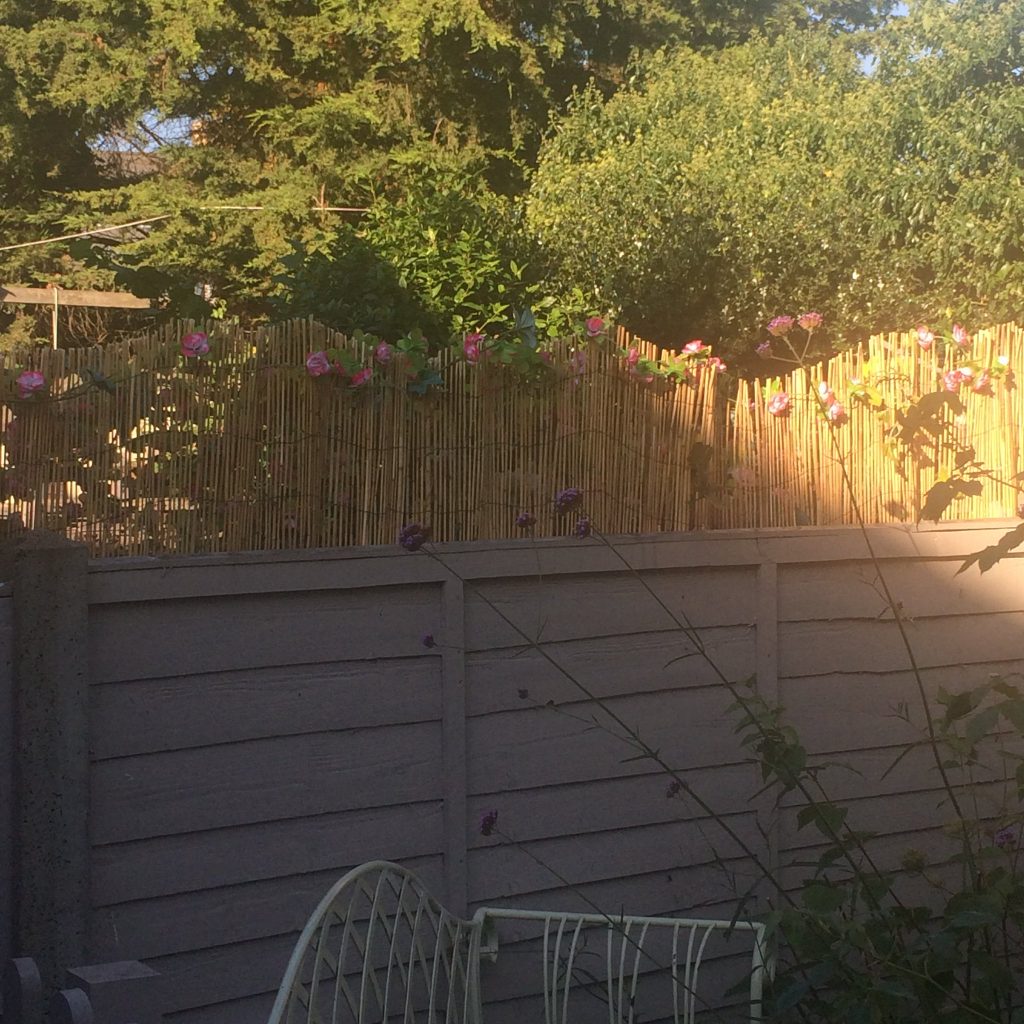 I really hoped it was a temporary measure. She stapled ivy and sunflowers to her side of the fence, too. I thought maybe she was having a party. When it became clear she was doing it in an attempt to ease the situation with her son, well, I was pretty mad. It looks awful and isn’t going to help. Stupid idea.

Fast-forward to January this year. It occurred to me that we could add a trellis to the top of our fence instead. It wouldn’t cover up all her screening, but it would blot some of it out and would mean the honeysuckle would have somewhere to cling to. I did some research and we bought some sturdy trellis (not the cheap stuff you get from Wilko) and some special brackets which attach to the fence and fix the trellis securely against our relentless winds.

So, everything ordered and expected to arrive by Easter, we were ready to make this happen.

Then the brackets didn’t arrive.

I did some fighting with the supplier and told him his communication was terrible and he shouldn’t promise a 2-3 day despatch turnaround if he can’t fulfil it.

In the meantime we painted the trellises to match the fence. I say we. Other than sourcing the trellis and brackets, and occasionally providing consultancy, I did no actual physical graft on this project. Mark did all the work.

Then, huzzah! the brackets arrived. We tested them out and discovered that while the brackets fit on the fence your average trellis is narrower, so it wobbles about in the bracket. Also, and this is entirely my fault, our fences are imperial while the trellis is metric. So there was a 3mm gap at each end too. What a kerfuffle. Off to the local building merchants to get some wood batons to use as spacers.

We used my favourite primer, Zinsser 1-2-3, to prime the galvanised brackets. Galvanised metal doesn’t take ordinary paint. You need a primer that will stick to it. Do your research if you intend to paint outdoor metal. (Or just buy a pot of Zinsser 1-2-3 because it will prime ANYTHING.) Then a coat of Cuprinol to match the fence/trellis.

Next, slide up the fence panel and prop it on some bricks while you screw everything in place. Gentle rubber mallet to bash them back down again (with the metal bracket on the fence, some of them were really quite tight) and hey presto!

Now to plant some annual climbers and another honeysuckle along the left fence, and tie in the existing honeysuckle on the right. 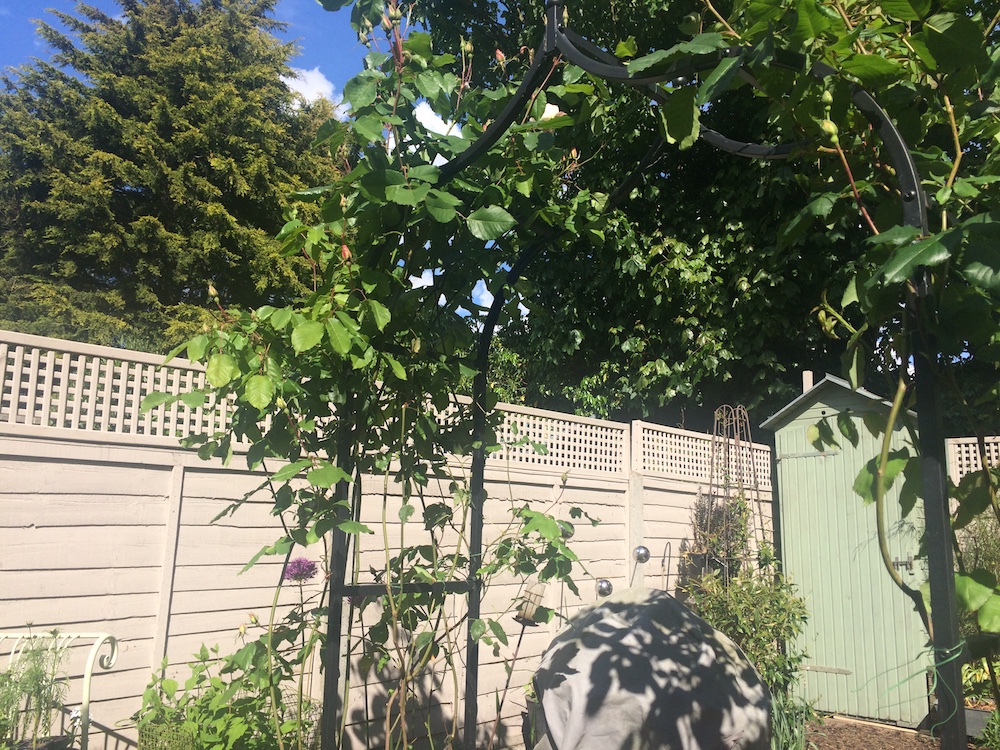 I think that’s better than the tiki bar screening, don’t you?

Things you need to know about fences.

There’s a well-known thing about how to work out which fence is yours and which is your neighbours depending which way the fence faces. Apparently, this isn’t accurate. Older houses often no longer have the boundaries in their original places when walls have been moved, or neighbours have made informal agreements. So, don’t take it for granted. The upshot is: if you want to change your fence, other than paint your side of it, you need to ask your neighbours. Just in case.

There are rules about the maximum height of any permanent structure on domestic boundaries. That means a wall or fence can only go up to 6 feet, but hedges and trees – ridiculously not considered permanent structures – have no such limits. If your fence/wall is roadside check with the council. In some cases, I think if there’s a possibility it might block drivers’ views of a turning, the height restriction is 5ft.