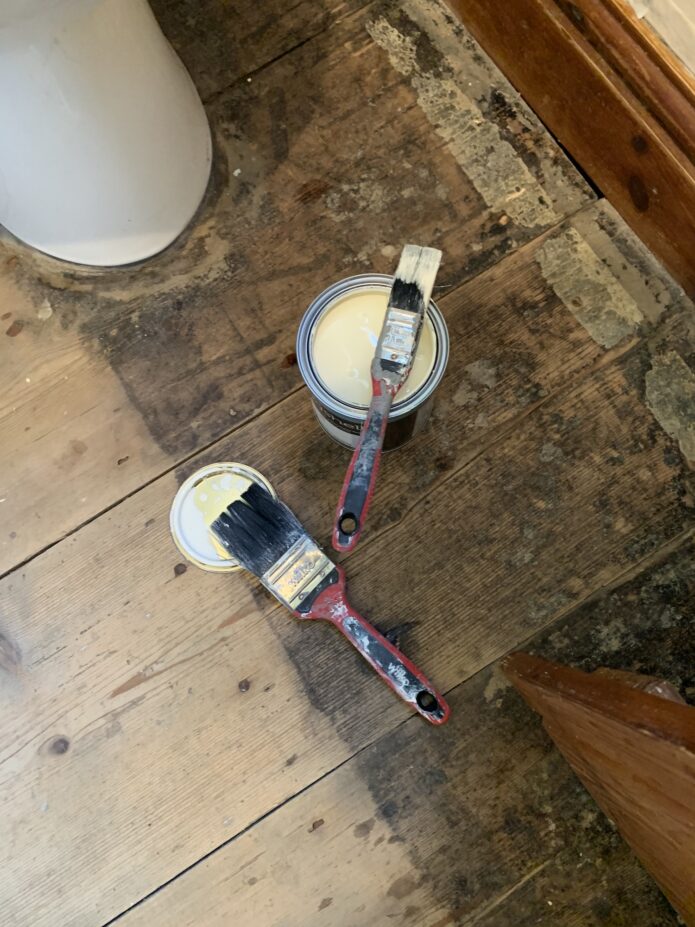 The bathroom was, as with every room in this house, yellow. A kind of peachy-sand shade of yellow. Yellow is really not my favourite colour. In the last house I used gold/ochre as a contrast against the dark grey of the living room. I had a primrose yellow chest of drawers to brighten an alcove in the bedroom. As a highlight colour, it’s fine. But every single room in this house is a different shade of yellow. I honestly don’t want to see another yellow wall for the rest of my life.

I like a soft aqua, a bluey green or a greeny blue for the bathroom. It feels clean, fresh, like a bathroom should. I couldn’t get the paint I wanted online or in nearby shops, so I bought Wilko’s own brand bathroom paint in a very pale blue. I would prefer a hint more green in it to warm it up, but regardless. The colour looks so much better next to the blue tiles than the peachy yellow colour. When we moved in there was carpet in the bathroom (I KNOW) which we pulled up as one of the very first jobs we did. I painted the floor with a light cream eggshell. Between the two things we have an almost acceptable bathroom for now.

One day I might paint the woodwork as well, but it feels like more effort than it’s worth for six months. I keep saying six months. It’s more likely to be nine months. When I think about it like that it feels like it might be worth it. But it’s a good enough upgrade for now. There are other things that need doing first.

Other quick fixes in the bathroom included sticking a soap dish on the tiles so the soap doesn’t slide into the basin every.single.time you wash your hands. I bought a “Command Bath” soap dish. It’s supposed to be water-resistant but it fell off the tiles pretty much instantly. Great. So I removed the dodgy strips and cut two strips of nano tape to size. So far they’ve held up. I took the toothbrush holder down as well since we use an electric toothbrush, so the basin area feels less cramped.

The airing cupboard has some slatted shelves that slide about, so we’ve nailed a couple of battens across the slats and hey presto! we have usable shelves.

I bought a cute bamboo bathroom caddy to corral the bottles and jars which, if we don’t need it in the new bathroom, Mark has claimed as a plant theatre. And a cheap but useful suction pad shower caddy with a million hooks for our flannels and shower scrubs. That might find a new life in the utility later, but if not it’ll be donated.

So, my bathroom is hardly an Instagram hit, but I tell you, it’s better than it was. I’ve made it feel cleaner and more welcoming, and maxed out the usable space. Job done.