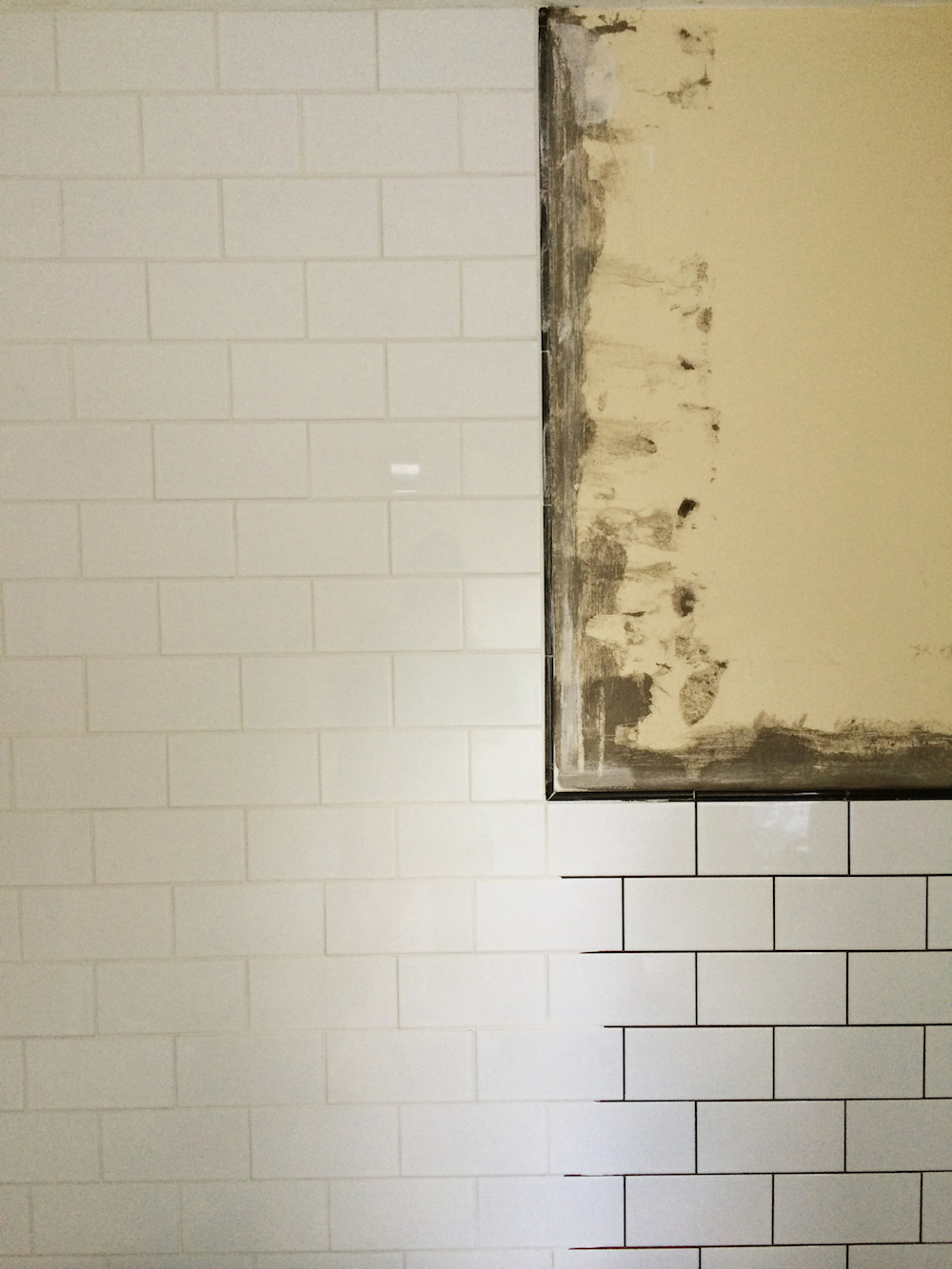 August 15, 2014before and after, home improvementsbathroom, projects, trades

But we also walked in and out of the bathroom-to-be being very excited about our almost-bathroom.

Mr Plumber turned up with piles of bits and bobs for the day’s work. He got to about 11 am before things went a bit wrong. The plaster fell off the bottom 12 inches of the sections of wall that were so far untiled. He had to fill in the gaps and slowly build up the layers of plaster, which meant he couldn’t tile them today. 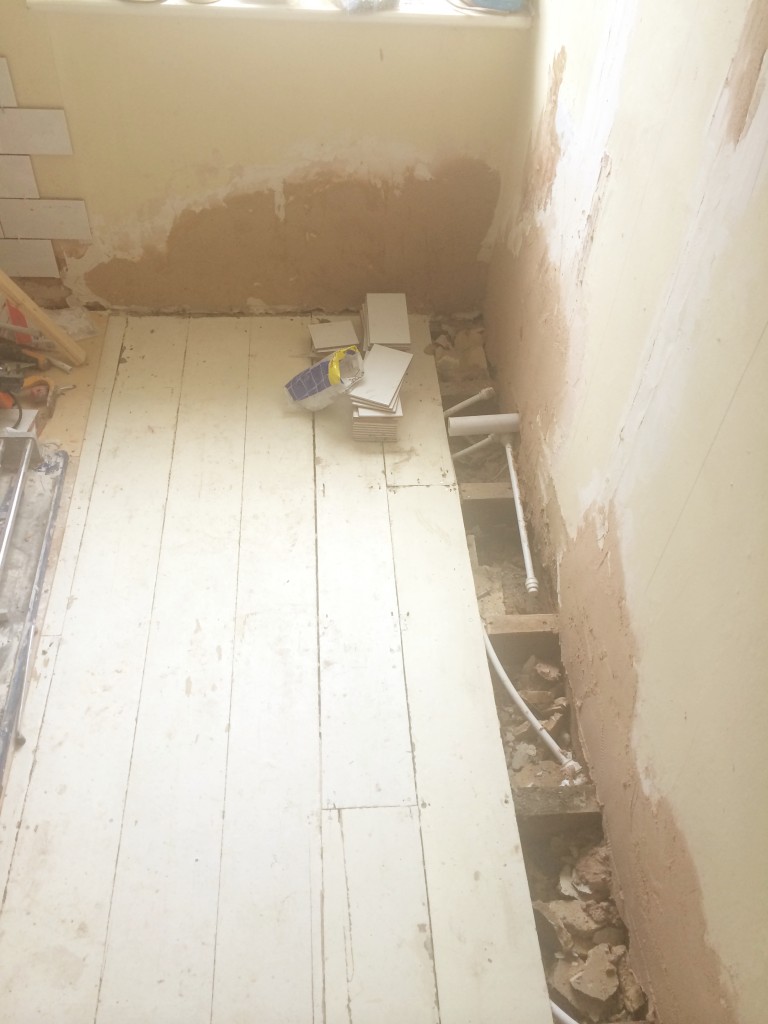 However, he did manage to tile the corner of the shower and he did a bit more plumbing. I know this because he kept turning the water off. 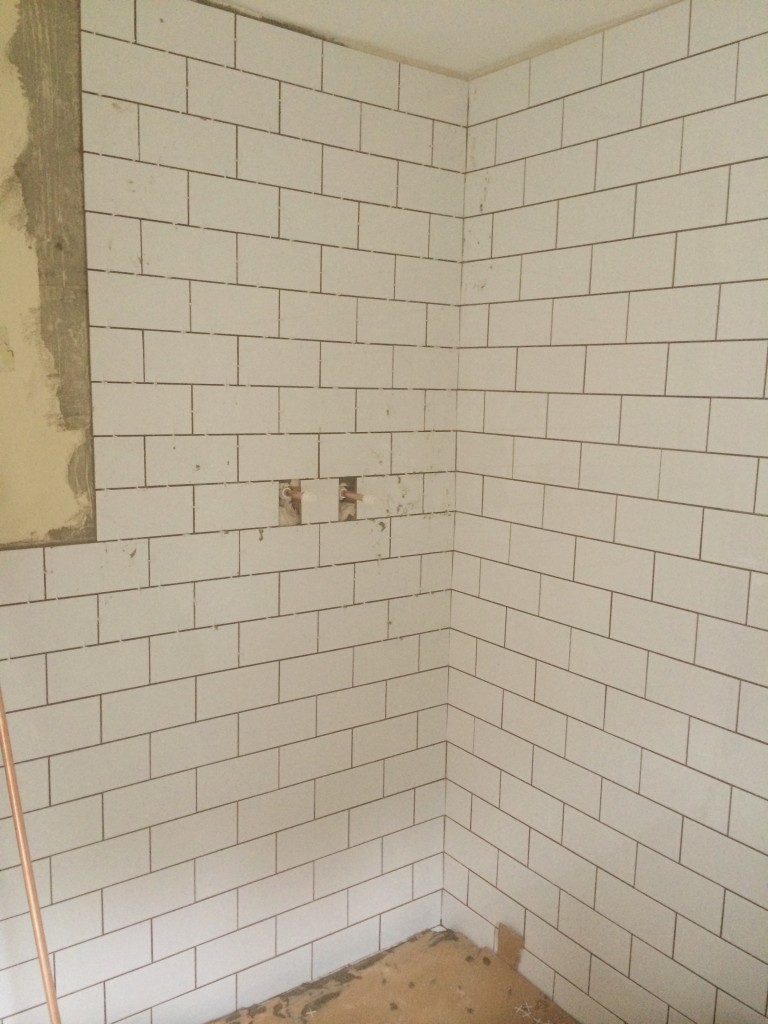 Stand by with your loofah! We nearly have a shower!

Today Mr Plumber broke the bad news that we were going to run out of tiles. He dashed off to a local tile merchant but the nearest he could find was not near enough.

I ordered two more boxes of tiles from our online retailer and bit the bullet on the delivery charge. We’d bought enough in the first batch to qualify for free delivery. Bit annoying. My spatial awareness and/or measuring tape skills are obviously poorer than I thought.

Mr Plumber rearranged his plans so that he could make progress while waiting for the remaining tiles to arrive. And that means we now have grout! first row of black tiles! pencil tiles! 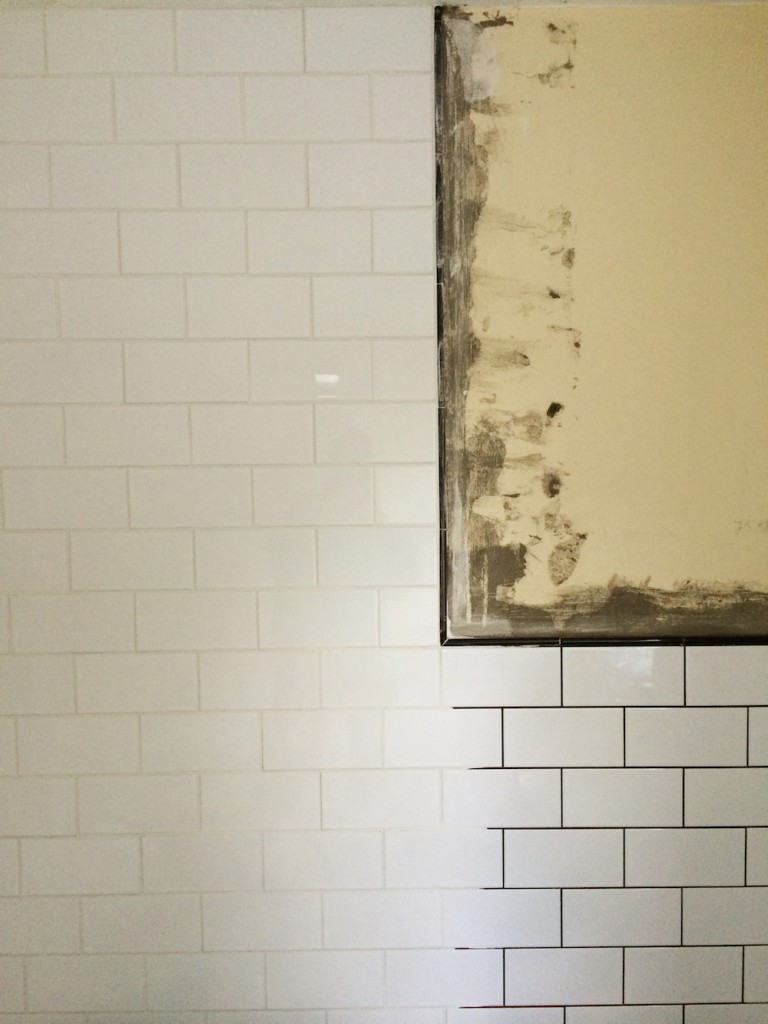 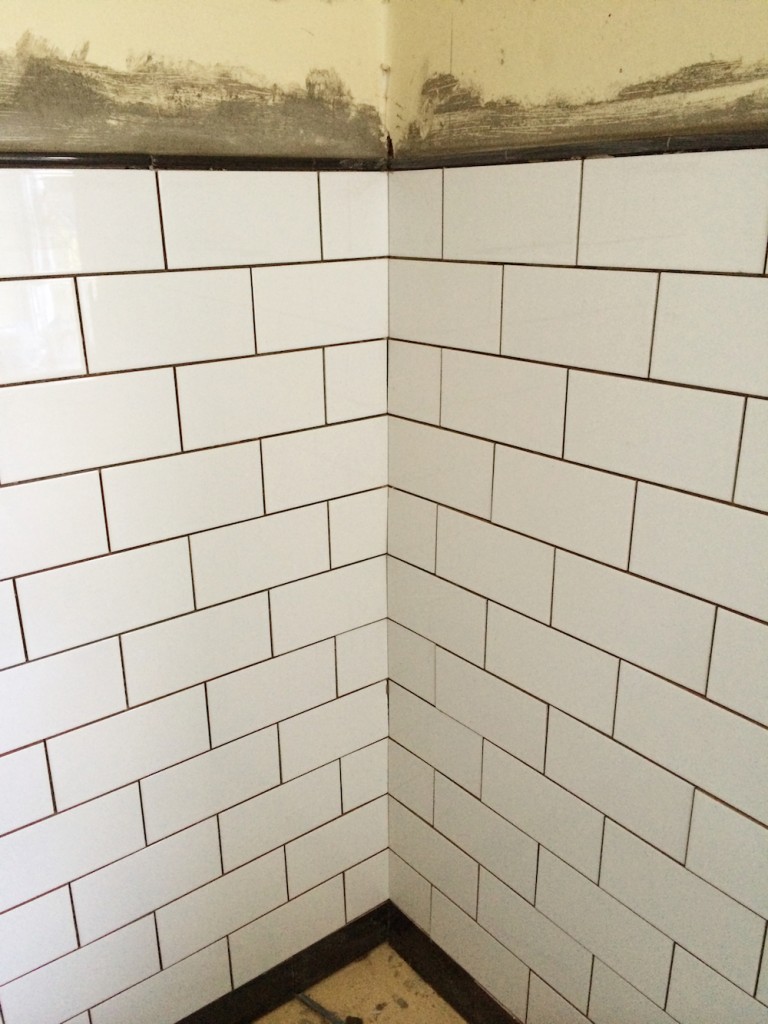 It’s starting to get that art deco feel we were aiming for. Even Mr Plumber’s boss commended my choice for creating something in keeping with the age and style of the house. proud face

Mr Plumber tidied up the last of the pipework ready to fit the towel heater and the basin unit and finished laying plyboard over the floorboards. Then he got on with laying the mosaic flooring.

He needs to finish the edges and do the grout. But still! Look! Floor! 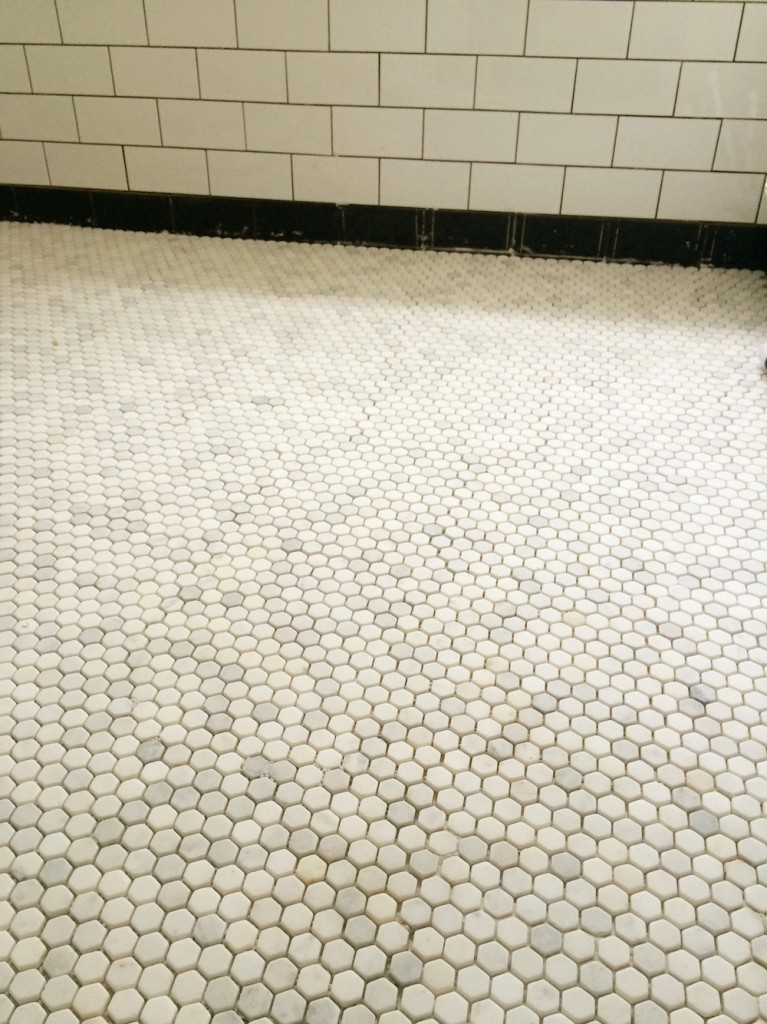 The desperately-awaited spare tiles have arrived. Though they were delivered to the wrong house. I don’t know. Really. How hard is it? (The delivery company then made the mistake of sending me a request for feedback. So I called them incompetent. They replied with a grovelling apology and told me that the delivery driver will be ‘on probation’ for 3 months now. Which seems somewhat excessive, but if it teaches him to read instructions then so be it.)

So, the remaining tiles are on, some are already grouted. The mosaic floor edges were a pain. Mr Plumber had to cut each of those tiny hexagons in half to finish the edges. I felt so bad when I realised that was going to take him half a day.

Then he put the toilet in its place, ready to build the box for around the Saniflo and… it wouldn’t fit as expected. Usually, I’m told, there’s a cut out right at the back the toilet, where most of us don’t ever venture, and the macerator sits in there nice and tidy. Not our loo. The cutaway at the back isn’t deep enough. There was much gnashing of teeth. We’d need a big boxed in area and even if it was tiled, it would probably still look rubbish.

So – deep breath – we’ve ordered a back-to-wall toilet with a concealed cistern unit. Now, I was considering one of these when I first started looking at bathroom suites, but it didn’t seem worth the extra expense. But there you go. Concealed cistern, slimline unit to match the basin unit and a very modern back-to-wall toilet are all now on order. The earliest regular delivery was next week so me and the bathroom fitting company are going halves on next-day delivery instead. They’re also going to buy the no-longer-required toilet off us at cost price, which leaves us not so terribly out of pocket.

It will look a lot better this way, I know, but I keep thinking we probably could’ve avoided the extra expense, not to mention stress, if things had been measured more precisely right at the start.

Let’s cheer ourselves up with some photos of the rest of the bathroom being tiled and the floor edging looking all smart and ready for grouting. 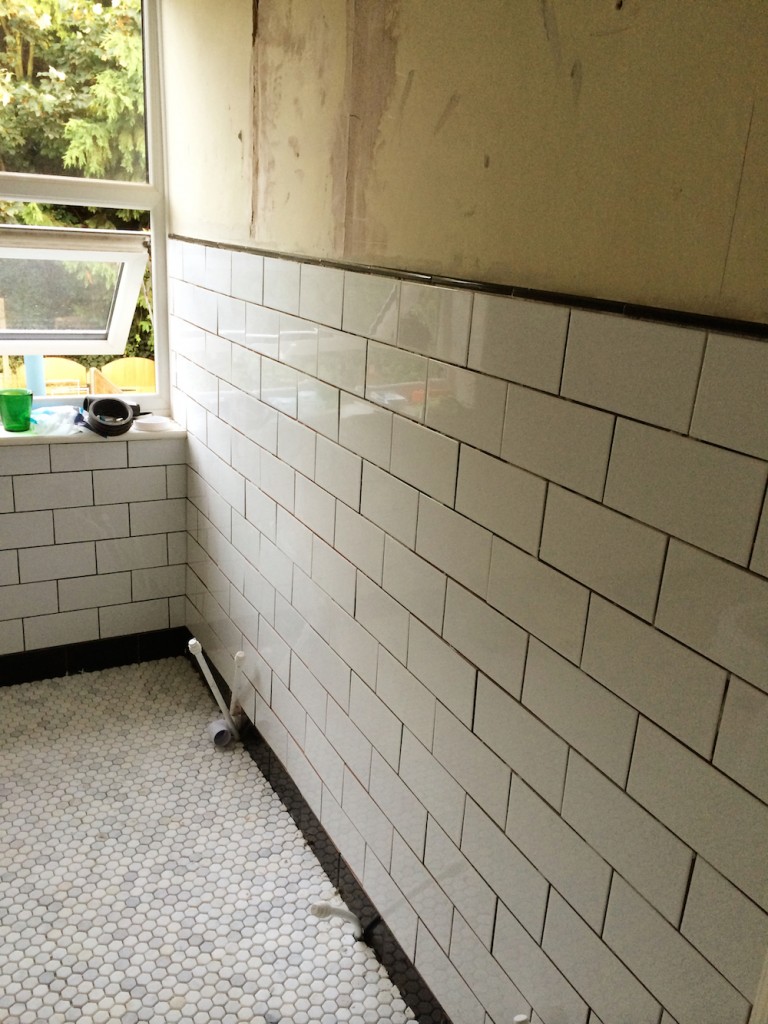 that’s it, we’re all tiled! 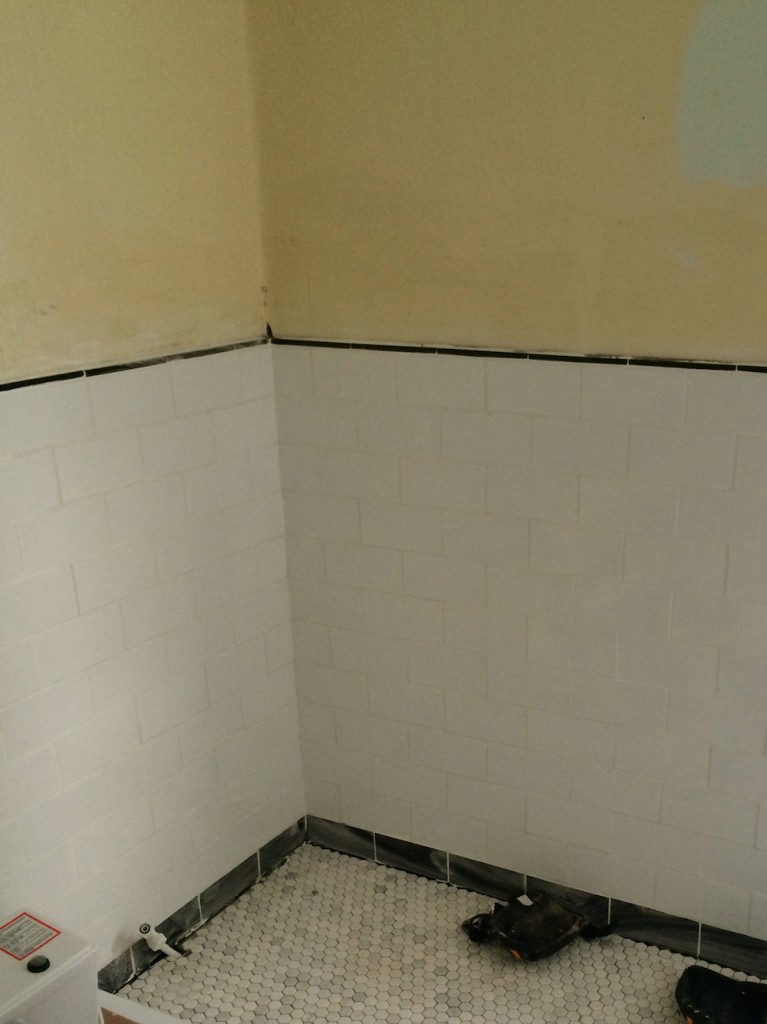 Mr Plumber spent a great deal of time cleaning the floor tiles of excess grout so they’re ready to seal. There’s still a fine coating of grout on them, so they’re going to need another good scrub once the grout has set properly. Poor Mr Plumber.

But, tada! We very nearly have a finished bathroom! 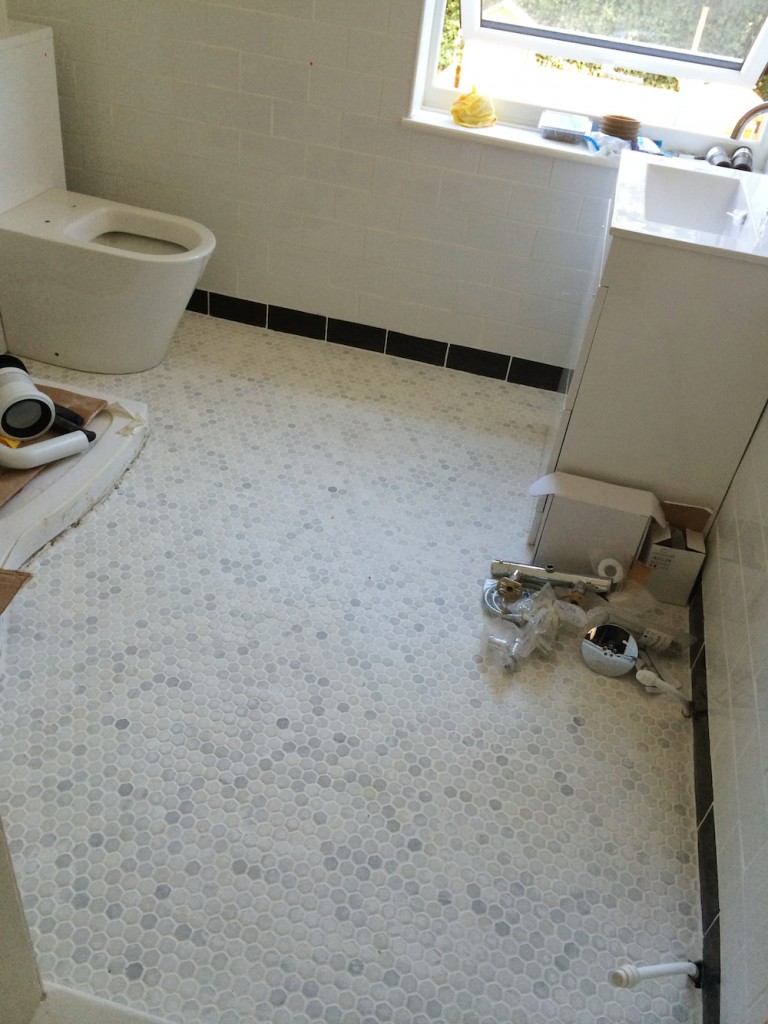 Look at all that space! I love the floor. Can’t wait to see it properly cleaned of grout.

The new toilet plus unit arrived early afternoon and it’s in place but not yet plumbed in. It will look very smart, it has very clean lines. (Talking of clean. Has anyone else thought about being the first person ever to use a toilet? That little gem thanks to a friend from work [Hi Dan!].) 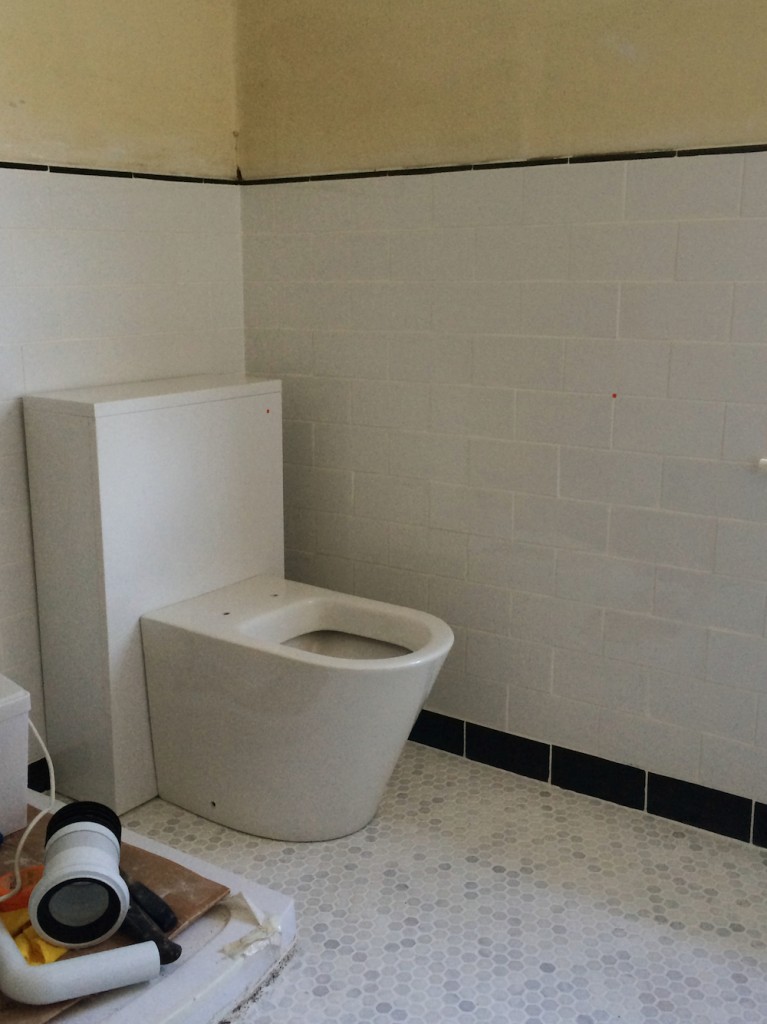 Meet the toilet of doom, or at least frustration. Fancy shape, though, isn’t it?

The basin unit is in place, but again, there’s some plumbing left to do. The basin is a cute shape with a straight lines AND curves thing going on. Much like the loo. So that’s a nice but unexpected outcome, the matching, sort of, styles. 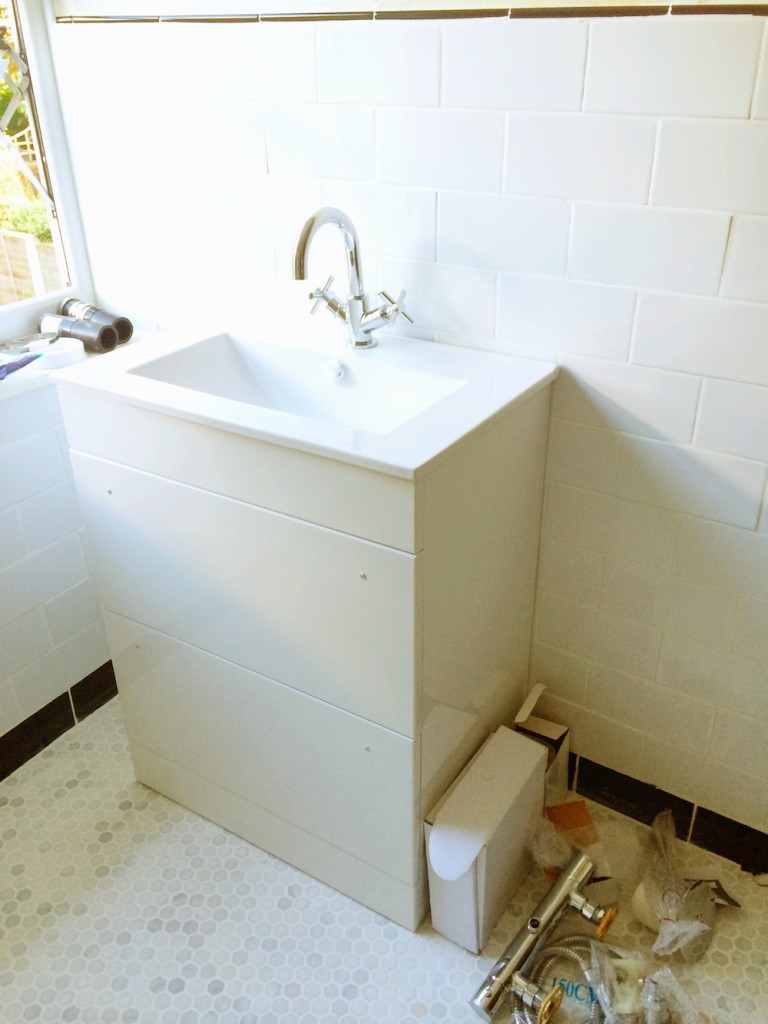 Basin and unit by the window – handles yet to fit 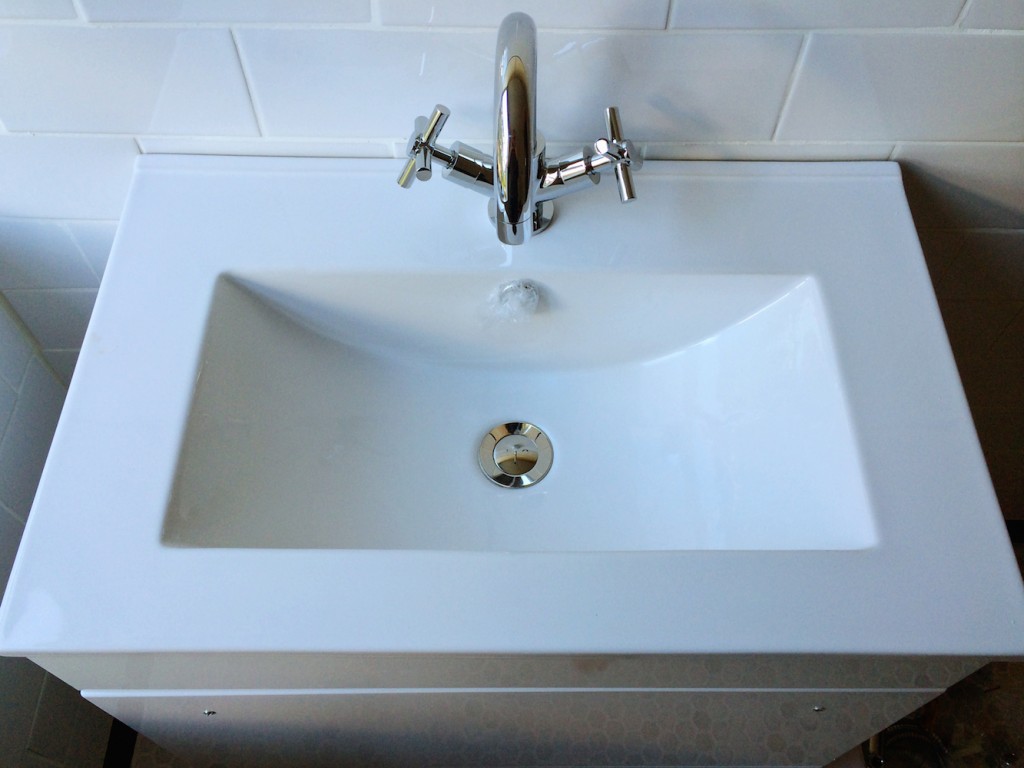 Still to do are a few bits of plumbing and electrics. Downstairs, the shower pump needs fitting and the pipes that come out of the boiler still need fixing to the wall and/or boxing in, depending on where they are. In the bathroom itself the lights and the extractor need fitting. The towel heater, shower fixture with the thermostat and riser and whatnot, and the shower screen are all still to fit.