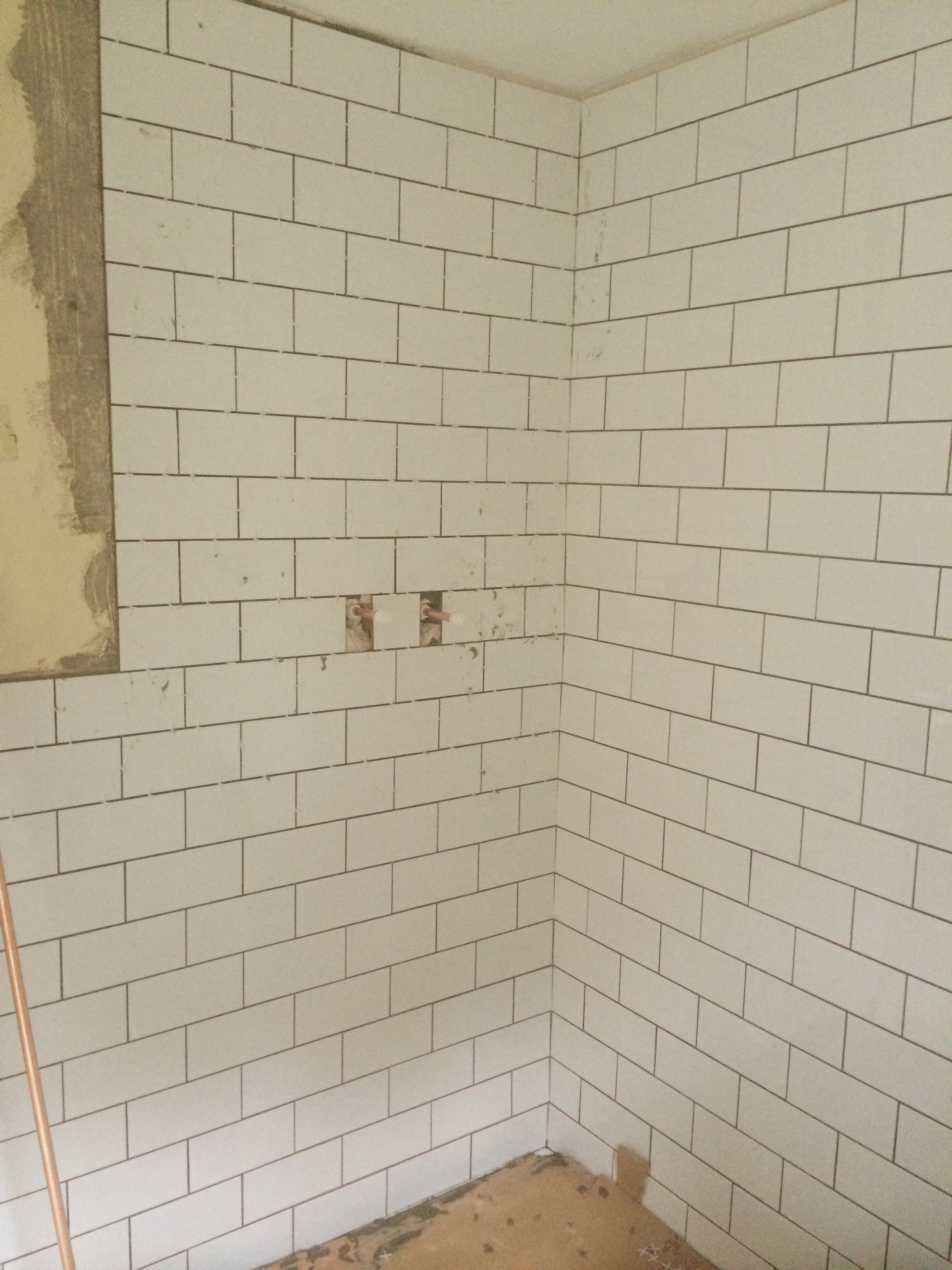 The bathroom isn’t finished. I know. How long does it take? Well, we were away on holiday for a week and the bathroom fitters were going to complete the bathroom then. We got back to find a few things that needed changing (some of which, it turned out, we couldn’t change) and a couple of things which that the builders wanted to discuss before going ahead.

Things I wasn’t happy about but we couldn’t change mostly came down to a combination of wonky and fragile walls.

The toilet unit, after all that fuss, has a gap of about 15mm at the top rather than sitting flush with the wall. (flush! a joke! totally not on purpose.) The argument goes that the unit is snug at the bottom but the wall is wonky on both the vertical and horizontal plane so by the time we get to the top there’s a noticeable gap. (Solution is to put a trailing plant on top of the unit to mask the side. I think it might work. Fake it till you make it and all that.)

The electrics were a bit of a nightmare too. We’ve ended up with 3 unattractive boxes on the wall above and to the side of the door. One is an isolator for the fan and it’s in a fairly good place and not too prominent. The next one would ordinarily go the other side of the ceiling and you wouldn’t see it but that room’s loft space is almost inaccessible so it’s on the wall instead. A bit wonky, unfortunately, and not intended to be on display. Finally, there needs to be an isolator type box for the Saniflo and the volume of cables requires a big chunky box. There was an alternative suggestion, when I said it looked awfully messy and I’d like a better solution, to put all threee boxes in a single box. I said “Yeah! Let’s do that!” and then they said, “Except your bricks crumble as soon as you look at them and we wouldn’t want to have to make yet another channel through that space which should have a lintel but doesn’t.” Basically the ceiling might fall down… So that’s pretty much ruled that out.

I don’t like the placement of the extractor fan. It’s too prominent. Because the ceiling slopes on that side it means the fan is very much within eye-level range, so I’d have preferred it tucked a little more into the corner. But meh. I can live with it. (Qué remedio.)

They didn’t fit a shower pump as there was a misunderstanding between the plumber and the project manager, and it’s not as cheap or straightforward as they’d led me to believe, so they want us to live with the shower and make our minds up later.

The floor needed sealing very last of all, and that happened on Friday. Since then we’ve started on the painting. booyaa spent hours on Saturday sanding down the plaster over the crumbled bits and channels they made for cables. That was quite a feat. Today he masked off the bathroom and did the first coat. We think the colour will turn out to be the right choice, but we’ll reserve judgement until the second coat is on and the accessories are in. 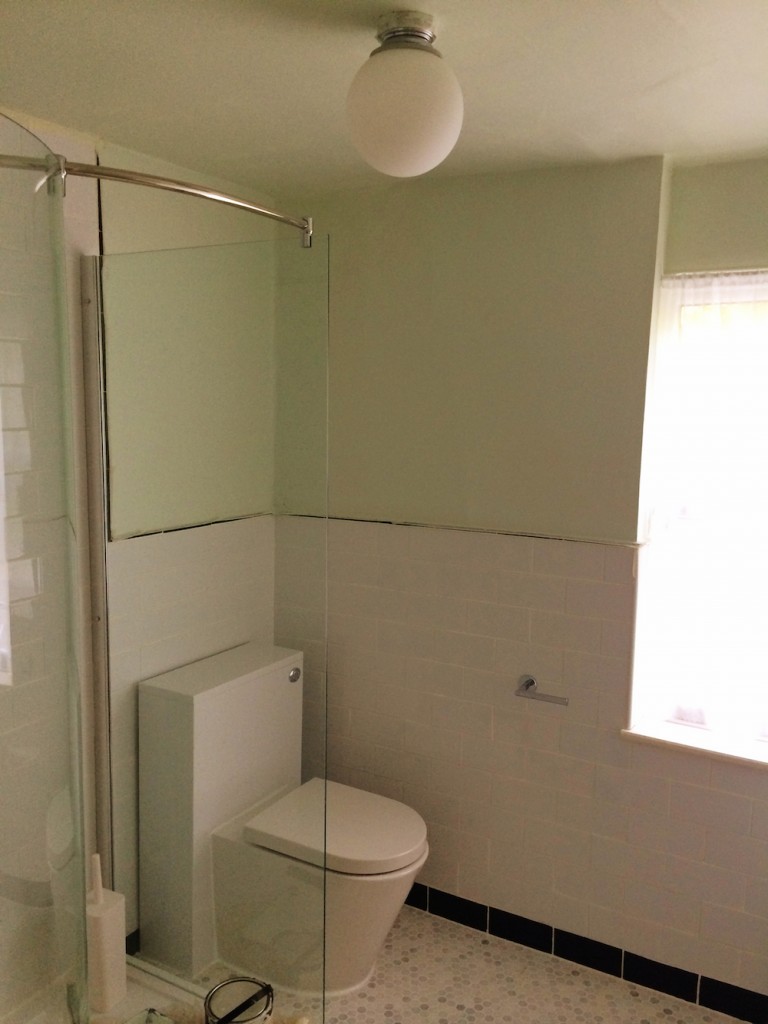 mid-painting, which is why you can see masking tape round the tiles, and a pot of paint in the shower…

One exciting thing is that we’ve both had middle-of-the-night trips to the loo without tripping down the stairs. Hurrah! And we’ve both tried out the shower. Hurrah! The shower is very nice. I love walking straight in with no doors. It also looks nice with its curves. And the overhead drench showerhead is just amazing. I’m so used to wetting my hair by tipping my head back but with this one practically your whole body is getting wet at the same time. The thermostat is great. You set it at the right temperature and it won’t go above or below it. We tested out the water pressure. While I was in the shower booyaa flushed the downstairs toilet and ran the taps. I noticed a drop of pressure but at least it didn’t turn cold. We think we’ll go ahead with the shower pump having experienced the pressure drop. In the mornings here the pressure is really low as everyone in the street is competing for water from the mains. I had cold showers for days on end because the pressure was too low for the boilet to kick in. No point having a fancypants bathroom if you can’t have a good strong shower. 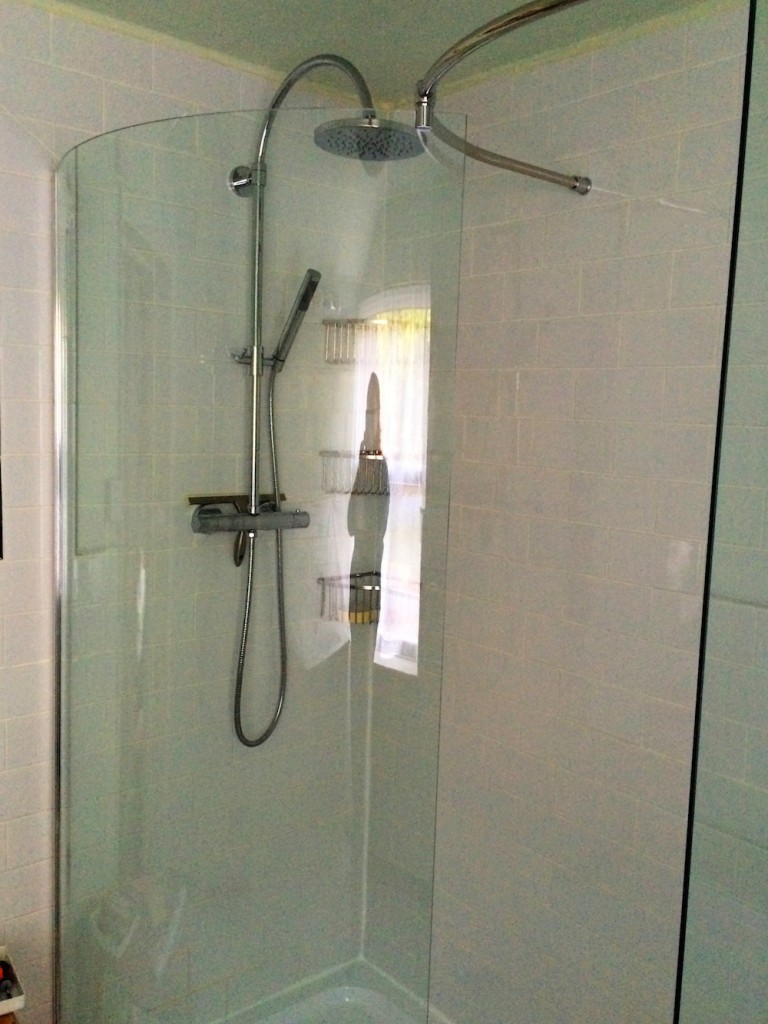 tricky getting a good shot of the whole shower but hopefully you can appreciate the beautiful curved glass, which is not that green in real life

THINGS I’VE LEARNED
What have we learned so far, now we’re near the end?
Have all the walls straightened before you start. I would definitely, were I to do this again, have the whole room reskimmed to get it as straight as possible.
Don’t go away, even when you think the builders have nearly finished. It’s so much easier to choose to do something a particular way than change it after it’s been done the way you wouldn’t have chosen.
The picture you have in your head is absolutely the Perfect World scenario. Dial down your expectations. If you don’t, you’ll be disappointed with the real thing when it’s presented to you.

One thought on “Are we there yet?”